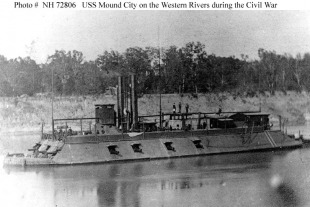 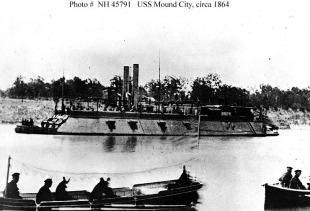 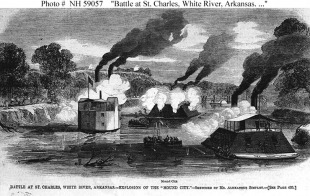 USS Mound City was a City-class ironclad gunboat built for service on the Mississippi River and its tributaries in the American Civil War. Originally commissioned as part of the Union Army's Western Gunboat Flotilla, she remained in that service until October 1862. Then the flotilla was transferred to the Navy and she became part of the Mississippi River Squadron, where she remained until the end of the war.

While with the Western Gunboat Flotilla, Mound City took part in combat at Island No. 10, at Fort Pillow, and in an expedition on the White River in Arkansas. At Fort Pillow, she was rammed by Confederate vessels of the River Defense Fleet and averted sinking only by retreating into shoals. On the White River during the Battle of Saint Charles, a chance Confederate shot penetrated the steam drum of her engines, resulting in 105 of its sailors being killed. An additional forty-five crew members were reported wounded, primarily by scalding. The ship suffered only minor damage.

After being transferred to the Navy's Mississippi River Squadron, she served in the Vicksburg campaign. Among her activities there were participation in the Steele's Bayou Expedition and the later bombardment of the batteries at Grand Gulf, Mississippi. Following the capture of Vicksburg and consequent opening of the Mississippi, she took part in the ill-fated Red River Expedition, from which she and the other ships were rescued only with difficulty.

With the end of hostilities, she was decommissioned and sold to private parties.