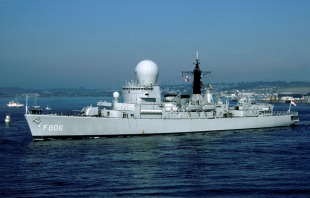 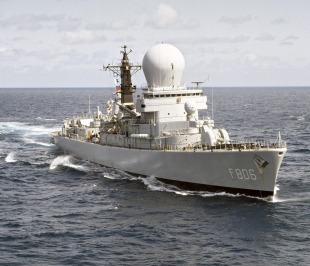 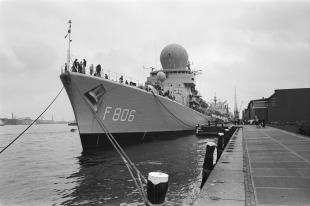 HNLMS De Ruyter (F806) (Dutch: Hr.Ms. De Ruyter) was a frigate of the Tromp class. The ship was in service with the Royal Netherlands Navy from 1976 to 2001. The frigate was named after Dutch naval hero Michiel de Ruyter. The ship's radio call sign was «PAEP».

HNLMS De Ruyter was one of two Tromp-class frigates and was built at the KM de Schelde in Vlissingen. The keel laying took place on 22 December 1971 and the launching on 9 March 1974. The ship was put into service on 3 June 1976.

The De Ruyter and the frigates Callenburgh, Jan van Brakel, Van Kinsbergen and the replenishment ship Poolster departed from Den Helder on 13 January 1986 for a trip to the Far East to show the flag and promote Dutch trade. The ships returned on 19 June.

During the mid-90s the ship was part off Standing Naval Forces Mediterranean (STANAVFORMED) and helped to enforce an embargo for the coast of Yugoslavia.

On 3 October 2001 the vessel was decommissioned and later scrapped. The bridge with radar dome of De Ruyter are preserved at the Dutch Navy Museum in Den Helder.