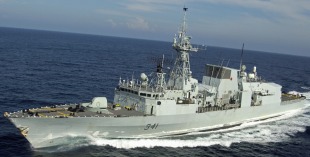 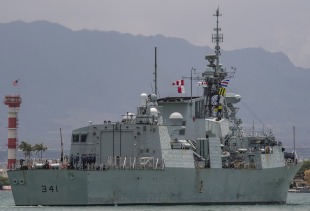 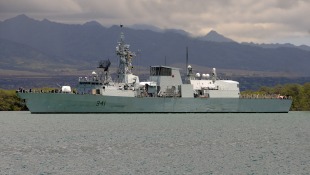 HMCS Ottawa is a Royal Canadian Navy Halifax-class frigate. Ottawa is the twelfth and final ship of the Halifax class that were built as part of the Canadian Patrol Frigate Project. She is the fourth vessel to carry the name HMCS Ottawa. The first three were named for the Ottawa River. This ship is the first named for Canada's national capital, the City of Ottawa. She is assigned to Maritime Forces Pacific (MARPAC) and is homeported at HMC Dockyard, CFB Esquimalt. Ottawa serves on MARPAC missions protecting Canada's sovereignty in the Pacific Ocean and enforcing Canadian laws in its territorial sea and Exclusive Economic Zone. Ottawa has also been deployed on missions throughout the Pacific and to the Indian Ocean; specifically the Persian Gulf and Arabian Sea on anti-terrorism operations.