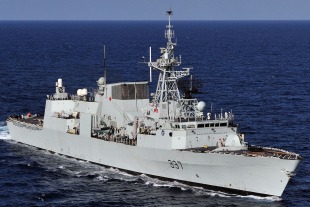 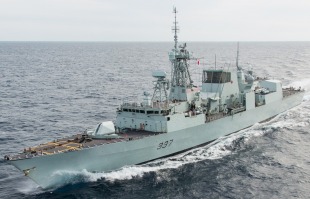 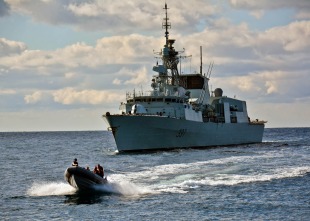 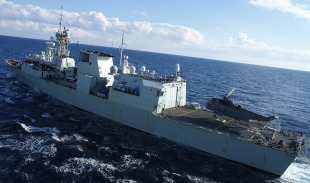 HMCS Fredericton is a Halifax-class frigate that has served in the Canadian Forces since 1994. Fredericton is the eighth ship in her class which is based on the Canadian Patrol Frigate Project. She is the second vessel to carry the name. Fredericton serves on MARLANT missions protecting Canada's sovereignty in the Atlantic Ocean and enforcing Canadian laws in its territorial sea and Exclusive Economic Zone. Fredericton has also been deployed on missions throughout the Atlantic and to the Indian Ocean; specifically the Persian Gulf and Arabian Sea on anti-terrorism operations. Fredericton has also participated in several NATO missions, patrolling the Atlantic Ocean as part of Standing Naval Force Atlantic (STANAVFORLANT) and its successor Standing NATO Response Force Maritime Group 1 (SNMG1). The frigate is assigned to Maritime Forces Atlantic (MARLANT) and is homeported at CFB Halifax.