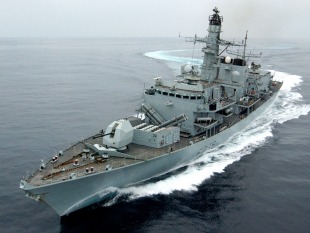 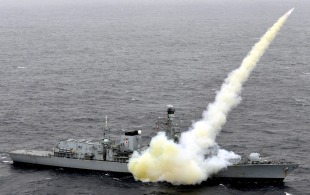 The current HMS Montrose is the eighth of the sixteen-ship Type 23 or Duke class of frigates, of the Royal Navy, named after the Duke of Montrose. She was laid down in November 1989 by Yarrow Shipbuilders on the Clyde, and was launched on 31 July 1992 by Edith Rifkind (later Lady Rifkind), wife of (later Sir) Malcolm Rifkind, Secretary of State for Defence. She was commissioned into service in June 1994.

Having once been the flagship of the 6th Frigate Squadron, Montrose became part of the Devonport Flotilla, based in Devonport Dockyard in Plymouth. In 2018, it was announced that Montrose would become the first Royal Navy frigate to be forward-deployed to the UK Naval Support Facility in Bahrain. The 2021 defence review announced that the ship would now be retired early, likely after her return to the U.K. from the Persian Gulf. She currently remains deployed conducting maritime security operations in the Persian Gulf. On 5 January 2022 the frigate passed the 1,000-day milestone of days at sea. The out of service date for Montrose is expected to be 2023.