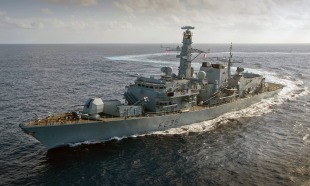 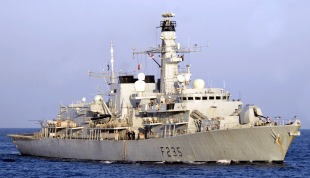 HMS Monmouth was the sixth «Duke»-class Type 23 frigate of the Royal Navy. She was the seventh ship to bear the name and was launched by Lady Eaton in 1991, being commissioned two years later.

Affectionately known as «The Black Duke», Monmouth was the only ship in service with the Royal Navy that has its name painted in black (all other RN vessels have their name in red) and flew a plain black flag in addition to the ensign. This is due to the dissolution of the title and the blacking out of the Coat of Arms of the Duke of Monmouth in 1685 following the Monmouth Rebellion against James II of England. Until her decommissioning, Monmouth carried the most battle honours of any ship name that was serving in the Royal Navy. HMS Monmouth was decommissioned on the 30 June 2021 and is now awaiting disposal in Fareham creek under the care of the disposal and reserve ships organisation.