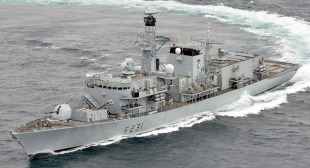 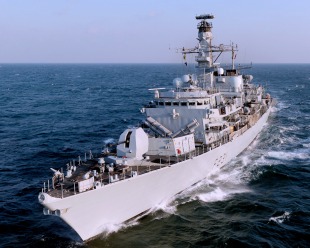 The third and current HMS Argyll is a Type 23 Duke-class frigate. She is currently the oldest serving Type 23 frigate in the Royal Navy. Like all of her class she is named after a British dukedom, in this case that of Argyll. HMS Argyll was laid down in March 1987 by Yarrow Shipbuilders at Glasgow, and launched in 1989 by Lady Wendy Levene, sponsored by the Worshipful Company of Paviors. She was commissioned in May 1991. Argyll is currently based at HMNB Devonport.

Argyll is the first Type 23 to be fitted with the new Sea Ceptor missile system. She had been scheduled to be withdrawn from service in 2023. However, in 2021 in a written answer provided to the House of Commons Select Defence Committee, the First Sea Lord, Admiral Tony Radakin, suggested that older Type 23 frigates would be retained in service longer than anticipated in order to ensure that total escort numbers did not fall below 17 ships (6 destroyers and 11 frigates) and start to rise above 19 escorts starting in 2026. If confirmed, this would mean that the older Type 23 frigates, such as Argyll, would have their anticipated service lives extended significantly.