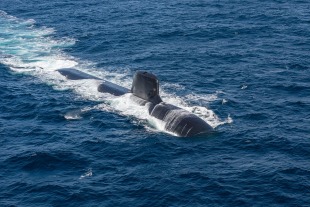 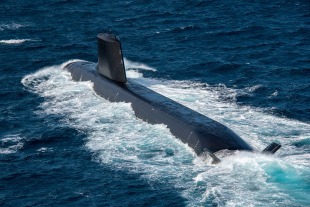 The Barracuda class (or Suffren class) is a nuclear attack submarine, designed by the French shipbuilder Naval Group (formerly known as DCNS and DCN) for the French Navy. It is intended to replace the Rubis-class submarines. Construction began in 2007 and the first unit was commissioned on 6 November 2020. The lead boat of the class, FS Suffren, officially entered service on June 3rd 2022.

On 22 December 2006, the French government placed a €7.9 billion order for six Barracuda submarines with Naval Group and their nuclear power plants with Areva-Technicatome. According to the DGA “Competition at the subcontractor level will be open to foreign companies for the first time.” According to the contract, the first boat was to commence sea trials in early 2016, with delivery occurring in late 2016/early 2017. This was to be followed by entry into service in late 2017. However, this timetable for service entry was later pushed back into the early 2020s.

DCNS/Naval Group has also put forward diesel-electric variants of the Barracuda, for several other navies.

One conventionally-powered concept, dubbed the SMX-Ocean, features fuel cells and vertical launchers. This variant has been offered to the Indian Navy.

In 2016, another variant, known within Naval Group as the Shortfin Barracuda – with a diesel-electric powerplant and scaled-down missile capabilities – was offered to both the Royal Australian Navy (RAN) and Royal Canadian Navy (RCN). That same year, the Shortfin Barracuda was selected by the Australian government, for a major expansion of the RAN submarine fleet during the 2030s. A total of 12 vessels were to enter service with the RAN from 2032, augmenting and replacing six Collins-class vessels. However, in mid-September 2021, the Australian government decided the RAN will instead acquire a nuclear-powered submarine design of British and American lineage, thus effectively cancelling the Barracuda contract.

Naval Group is also offering a subvariant of the Shortfin diesel-electric design, as a replacement for the current Walrus-class submarines of the Royal Netherlands Navy, competing against the A26 design put forward by Saab and Damen.

Barracudas will use technology from the Triomphant class, including pump-jet propulsion. This class reportedly produces approximately 1/1000 of the detectable noise of the Redoutable-class boats, and they are ten times more sensitive in detecting other submarines. They will be fitted with torpedo-tube-launched MdCN cruise missiles for long-range (well above 1,000 km, 620 mi) strikes against strategic land targets. Their missions will include anti-surface and anti-submarine warfare, land attack, intelligence gathering, crisis management and special operations.

The Barracuda class nuclear reactor incorporates several improvements over that of the preceding Rubis. Notably, it extends the time between refueling and complex overhauls (RCOHs) from 7 to 10 years, enabling higher at-sea availability.

In support of special operations missions, Barracudas may also accommodate up to 15 commandos, while carrying their equipment in a mobile pod attached aft of the sail.