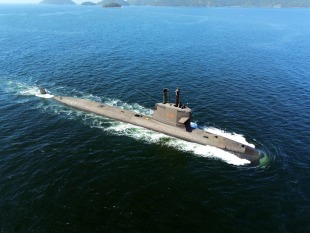 In 2009, Brazil purchased four enlarged Scorpènes for US$ 10 billion with a technology transfer agreement and a second agreement to develop a French/Brazilian nuclear-powered submarine. The Brazilian submarine class was given the designation Riachuelo class. The hull of the first S-BR (S40) was laid down at Cherbourg on 27 May 2010 and is to be jumboized at the Brazilian Navy Shipyard in Sepetiba in late 2012. The latter three submarines will be built there entirely, and are planned to be commissioned in 2020, 2021, and 2022.

The first submarine Riachuelo was launched on 14 December 2018, and began sea trials in September 2019. All the submarines are built by the Brazilian defence company Itaguaí Construções Navais.