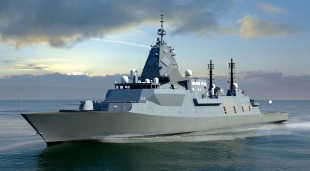 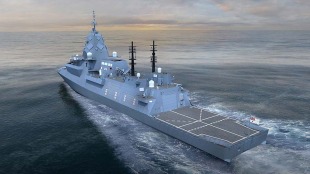 The Hunter-class frigate is a future class of heavy frigates for the Royal Australian Navy (RAN) to replace the Anzac class. Construction is expected to begin in 2022, with the first of nine vessels to enter service in 2031. The Program is expected to cost AU$35 billion and a request for tender was released in March 2017 to three contenders: Navantia, Fincantieri, and BAE Systems as part of a competitive evaluation process.

The genesis of the Future Frigate Program came in 2009, when the Rudd Government’s Defence White Paper signalled Australia’s intent to «acquire a fleet of eight new Future Frigates, which will be larger than the Anzac-class vessels» with a focus on anti-submarine warfare. With an initial tender expected in 2019–20, in 2014 the Abbott Government announced that work had been brought forward, funding a preliminary design study focussed on integrating a CEAFAR Radar and Saab combat system on the hull of the Hobart-class destroyer.

Following a report by the RAND Corporation into options for Australia’s naval shipbuilding industry, the Government announced an $89 billion naval shipbuilding plan. This plan brought the schedule of the Future Frigate Program forward by three years and announced a «continuous onshore build program to commence in 2020» in South Australia. A competitive evaluation process was announced in April 2016, with Navantia, Fincantieri, and BAE Systems revealed as the contenders to design the ships.

BAE Systems offered an export variant of its Type 26. The Type 26 and the smaller, cheaper Type 31 will replace the Royal Navy's Type 22 and Type 23 frigate fleets.

A Saab tactical interface with the Aegis combat interface will be used. The vessel will be able to carry one MH-60R ASW helicopter, and has the ability to host other Australian aircraft such as the MRH90 helicopter. The ships will be built by BAE Systems Australia at Osborne Naval Shipyard.