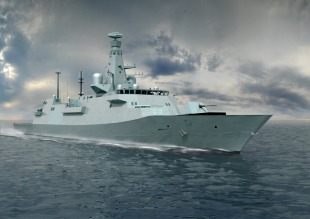 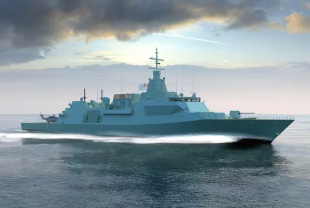 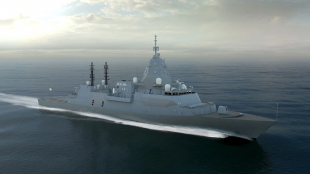 The Global Combat Ship started development under the original Future Surface Combatant (FSC) programme, intended to replace the Royal Navy's Type 22 and Type 23 frigates. Planning for a replacement escort vessel started in 1998 with the ordering of a research vessel, RV Triton, to study whether a trimaran design was practical for such a large and complex vessel. However, more conventional designs were ultimately preferred. In March 2005, plans were released for a two-class solution, a cheaper «Medium Sized Vessel Derivative» entering service in 2016–19 and a more capable «Versatile Surface Combatant» entering service around 2023.

In early 2006 the MoD started a Sustained Surface Combatant Capability (S2C2) programme which explored synergies between the FSC and other needs, for minesweepers, patrol ships and survey ships. By early 2007 this had crystallized into the three requirements; C1, C2 and C3. The C1 was to be an anti-submarine warfare task group-enabled platform and would displace around 6,000 tonnes. C2 was to be a more general purpose platform displacing somewhere in the region of 4–5,000 tonnes, and C3 was to be a Global Corvette to replace a larger number of smaller vessels in service, such as minesweepers, patrol and survey ships. The Global Corvette was to displace around 2–3,000 tonnes.

The C3 concept began in early 2004 when the MoD issued a Request for Information (RFI) for a smaller class of ship known as the Global Corvette. Low running costs and the ability to operate forward in shallow, coastal areas where larger ships cannot, were both important. BAE Systems, VT Group, Thales and Rolls-Royce responded in autumn 2004 with concepts ranging from a well-equipped Offshore Patrol Vessel (OPV) of 1,500 tonnes to an advanced and very capable «corvette» of 3,000 tonnes, along the lines of the USN's Littoral Combat Ship programme (LCS).

In 2009 BAE Systems received a contract to design the C1 and C2 frigates with a planned 25-year life. A total of 18 vessels (10 C1 and 8 C2) were planned to enter service from 2020, at a pace of roughly one per year. In early 2010 the C3 variant was dropped in favour of the Mine Countermeasures, Hydrography and Patrol Capability (MHPC) programme.

Official mention of the Future Surface Combatant had all but disappeared by 2010, and on 25 March of that year BAE Systems were given a four-year, £127 million contract by the Ministry of Defence to fully design a new class of warship, the «Global Combat Ship», previously C1 of the FSC. Expectations at the time were for the first ship to be «in service» by 2021. The October 2010 Strategic Defence and Security Review (SDSR) reaffirmed the government's commitment to the Global Combat Ship.

BAE Systems' original working baseline for the Global Combat Ship design was a vessel 141 metres long with a displacement of 6,850 tonnes and a range of 7,000 nautical miles at 18 knots. However, on 30 November 2010 it was reported that the specifications had been pared down, in effort to reduce the cost from £500M to £250–350M per ship. Subsequently, new specification details began to emerge of a smaller 5,400 tonne ship emphasising flexibility and modularity.

Unlike the FSC, the Global Combat Ship has only one hull design. However like the Franco-Italian family of FREMM multipurpose frigates, three versions are proposed for export: a design optimized for anti-submarine warfare (ASW), an anti-aircraft warfare (AAW) variant, and a general purpose (GP) variant.

Although a decision was made in November 2010 to reduce the specifications and capability requirements of the Global Combat Ship design, BAE Systems' design concepts by 2014 had returned to their original working baseline of a large 6,900 tonne warships.

In June 2018, the Australian Government announced that it had selected a modified version of the Type 26 platform as the planned replacement for its Anzac-class frigate. This will see the Royal Australian Navy procure up to nine Hunter-class frigates, which will be constructed by BAE Systems Australia at ASC's shipyard in Osborne, South Australia.

On 8 February 2019, Procurement Minister Carla Qualtrough announced that the Canadian government had awarded Lockheed Martin Canada a C$185 million contract to design a fleet of up to 15 warships based on the Type 26 (the Canadian Surface Combatant), with a total program cost of $60 billion. The amount of the contract will increase as the design work increases. The initial design contract is with Irving Shipbuilding of Halifax.