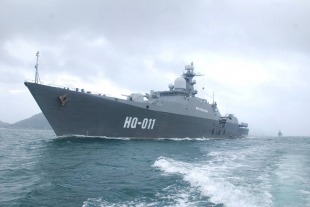 Dinh Tien Hoang (HQ-011) is the first Gepard-class frigate (Gepard 3.9 type) in the Vietnam People's Navy. The VPN contracted the Zelenodolsk shipyard in Russia to build the ship.

Vietnam and Russia signed a contract on 12 May 2006 worth USD $350 million to build two Gepard-class frigates designed by the Institute ZPKB in Zelenodolsk.

At the request of the Vietnam People's Navy the ship known as Project 11661 was completely redesigned to become Gepard 3.9. The redesigned ships include stealth technology and the most advanced weapons available from Russia today, including air defense systems, Palma Close-in weapon system AK-630, Kh-35 anti-ship missiles, and Kamov Ka-27 helicopters. The anti-submarine technology includes the RBU-6000 anti-submarine rocket launcher. These two ships are the latest generation of the Gepard class produced at the Zelenodolsk plant. It took two years to build the prototypes under Project 11661.

Dinh Tien Hoang (HQ-011) was launched on 12 December 2010. The ship is named after Đinh Tiên Hoàng, the first Vietnamese emperor following the defeat of the Twelve Warlords. He was the founder of the short-lived Dinh Dynasty and a significant figure in the establishment of Vietnamese political unity in the tenth century.

Dinh Tien Hoang (HQ-011) will engage in an exchange with Singapore’s naval force from 23 to 26 January 2016 and participate in the International Fleet Review 2016 in early February.

The navy had already purchased two Gepard 3.9 frigates in 2011. Interfax reported that Vietnam signed contracts with Rosoboronexport to provide two more Gepard 5.3 frigates. According to Sergei Rudenko Gorky, Deputy Director of the Zelenodolsk shipyard, the first two Gepard frigates are equipped with the most modern missiles, and the second pair will be equipped with the most modern anti-submarine devices.