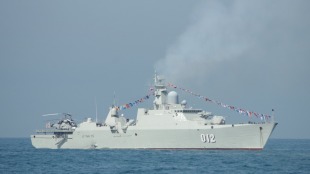 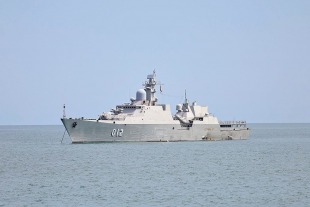 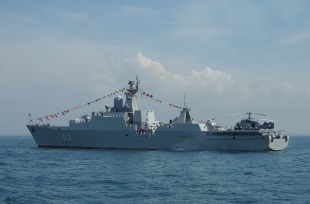 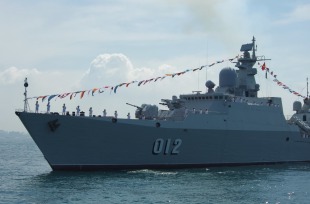 Namesake:
Emperor and founder of the Ly Dynasty
Operator:

Frigate Ly Thai To is a Gepard-class frigate (Gepard 3.9 type) in the Vietnam People's Navy. She was built by the Zelenodolsk shipyard in Russia under signed contract to the Vietnamese Navy.

The frigate is designed to perform searches, track and destroy floating target ships, air defense, anti-submarine (limited), escort, and patrol territorial waters and special areas with economic rights. Frigate Ly Thai To can enter combat independently or in squadrons, and is equipped with stealth technology, to present a minimum presence on enemy radar screens.

Vietnam and Russia signed a contract worth USD $350 million to build two Gepard-class frigates designed by the Institute ZPKB in Zelenodolsk.

According to the manufacturer, Ly Thai To's interior has been modified to increase crew comfort, improved compared to Dinh Tien Hoang – the previous Gepard 3.9 in Vietnam People's Navy. She has more convenient maintenance and operation, improved seaworthiness, higher maneuverability, and is better able to handle a range of situations.

The navy had already purchased two Gepard 3.9 frigates in 2011. Interfax reported that Vietnam signed contracts with Rosoboronexport to provide two more Gepard 5.3 frigates. According to Sergei Rudenko Gorky, Deputy Director of the Zelenodolsk shipyard, the first two Gepard frigates are equipped with the most modern missiles, and the second pair will be equipped with the most modern anti-submarine devices.