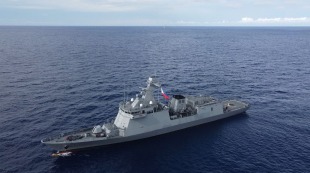 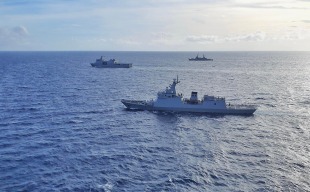 The future BRP Antonio Luna (FF 151) is the second ship of the Jose Rizal-class frigate, ordered for future service with the Philippine Navy.

The frigate is expected to be delivered to the Philippine Navy by September 2020, and will become one of the service's primary warship until the introduction of new and more powerful contemporaries.

The BRP Antonio Luna was designed and built by Hyundai Heavy Industries (HHI). She was based on the HDF-2600 Frigate Design, which in turn was derived from the HDF-3000 Incheon-class frigate of the Republic of Korea Navy (ROKN).

Changes were made on the base design by making use of features found on newer frigates of the ROKN like the Daegu-class frigate, considering reduced radar cross-section by having cleaner lines and smooth surface design, as well as reduced overhangs. She also features a low free-board design similar also to the Daegu-class and the HTMS Bhumibol Adulyadej of the Royal Thai Navy.

It was assigned the project number P160 by HHI, with the steel cutting ceremony conducted on 17 September 2018 in HHI's shipyard in Ulsan, South Korea. The keel laying ceremony was held on 23 May 2019.

The launching ceremony was held on 8 November 2019. The ship is expected to be delivered to the Philippine Navy by September 2020 and be commissioned on November 2020.