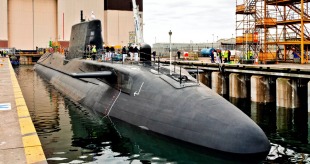 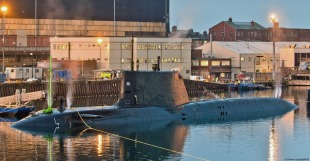 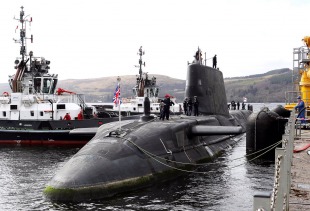 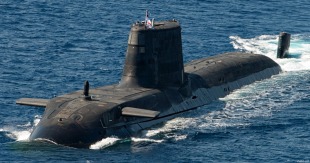 HMS Audacious is the fourth Astute-class nuclear-powered fleet submarine of the Royal Navy. Several previous vessels of the Royal Navy have borne the name. She was formally named on 16 December 2016 and was launched on 28 April 2017. Audacious is stated to be handed over in January 2021. A parliamentary written answer stated that Audacious was commissioned on 3 April 2020.

Audacious's nuclear reactor will not need to be refuelled during the boat's 25-year service. The submarine can purify water and air, and will be able to circumnavigate the planet without surfacing. However, she will only carry three months' supply of food for 98 officers and ratings.

Audacious will have provision for up-to 38 weapons in six 21-inch (533 mm) torpedo tubes. The submarine will be capable of using Tomahawk Block IV land-attack missiles with a range of 1,000 miles (1,600 kilometres) and Spearfish heavyweight torpedoes.

The submarine and its crew have formally forged links with the City of Leeds (which had previously had an association with HMS Ark Royal) by meeting the people at Elland Road in the city and marching in the Armistice Day parade in November 2016.

Audacious completed her first dive at Devonshire Dock over two days in January 2018. She eventually sailed from Barrow on 4 April 2020, and commenced sea trials on 6 April 2020.