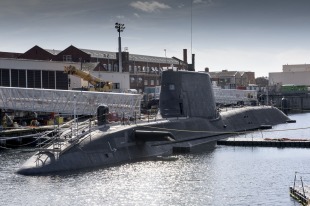 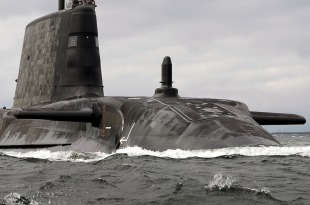 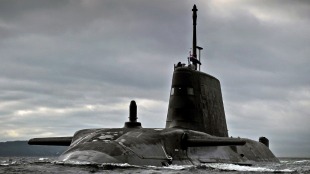 HMS Artful is the third Astute-class nuclear-powered fleet submarine of the British Royal Navy. She is the second submarine of the Royal Navy to bear this name. Artful was ordered from GEC's Marconi Marine (now BAE Systems Submarine Solutions) on 17 March 1997, and was constructed at Barrow in Furness. She was named on 20 September 2013, was rolled out of the shipyard construction hall on 16 May 2014, and was due to start sea trials in early 2015. Artful made her first successful basin dive in October 2014, and sailed on 13 August 2015 for sea trials. Artful was handed over the Royal Navy on 14 December 2015, and commissioned on 18 March 2016.

Artful's nuclear reactor will not need to be refuelled during the boat's 25-year service. Since the submarine can purify water and air, she will be able to circumnavigate the planet without resurfacing. The main limit is that the submarine will only be able to carry three months' supply of food for 98 officers and ratings.

Artful has provision for up-to 38 weapons in six 21-inch (533 mm) torpedo tubes. The submarine is capable of using Tomahawk Block IV land-attack missiles with a range of 1,000 miles (1,600 kilometres) and Spearfish heavyweight torpedoes.