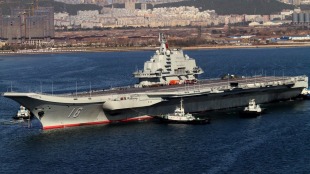 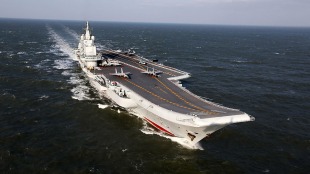 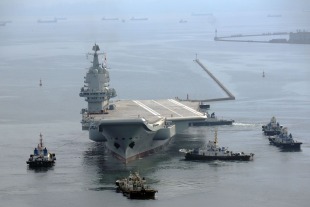 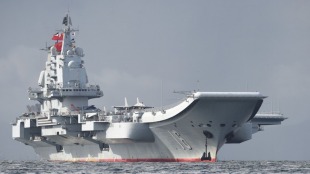 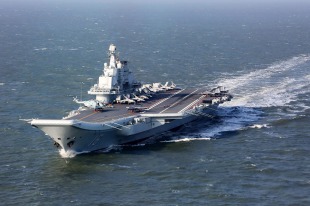 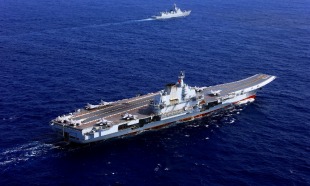 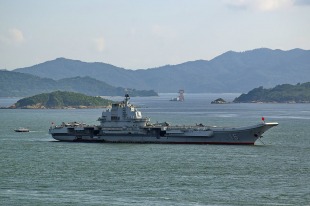 Liaoning (16) is a Chinese Type 001 aircraft carrier. The first aircraft carrier commissioned into the People's Liberation Army Navy Surface Force, she was originally classified as a training ship, intended to allow the Navy to experiment, train and gain familiarity with aircraft carrier operations. Following upgrades and additional training in late 2018, the Global Times announced that the ship would shift to a combat role in 2019.

Originally laid down in 1985 for the Soviet Navy as the Kuznetsov-class aircraft cruiser Riga, she was launched on 4 December 1988 and renamed Varyag in 1990. After the dissolution of the Soviet Union in 1991, construction was halted and the ship was put up for sale by Ukraine. The stripped hulk was purchased in 1998 and towed to the Dalian naval shipyard in northeast China.

The ship was rebuilt and commissioned into the People's Liberation Army Navy (PLAN) as Liaoning on 25 September 2012. Its Chinese ship class designation is Type 001. In November 2016, the political commissar of Liaoning, Commodore Li Dongyou, stated that Liaoning was combat ready.

The ship was laid down as Riga at Shipyard 444 (now Mykolaiv South) in Mykolaiv, Ukrainian SSR, on 6 December 1985. Design work was undertaken by the Nevskoye Planning and Design Bureau. Launched on 4 December 1988, the carrier was renamed Varyag in late 1990, after a previous similarly-named cruiser launched in 1899. When the Soviet Union collapsed in 1991, the ship was only 68% complete. Construction was halted, and the ship was put up for sale. The name Varyag was then adopted by another cruiser launched in 1983.

Ukraine approached China, India, and Russia as potential buyers. China sent a high-level delegation in 1992, which reported that the ship was in good condition and recommended a purchase. However, the Chinese government declined to purchase the ship because of the international diplomatic situation at the time. Unable to find a buyer, Ukraine left the ship to deteriorate in the elements.

In 1998, the rusting hulk was sold at auction for $20 million to Agencia Turistica E Diversoes Chong Lot Limitada, a company from Macau. Chong Lot proposed to tow Varyag to Macau, where the ship would be converted into a $200 million floating hotel and casino. Western observers were suspicious, since Chong Lot had no listed telephone number, was not located at its listed address, and was run by former officers in the Chinese Navy. Officials in Macau also denied Chong Lot's application to operate a casino. However, analysts noted that Varyag had deteriorated too much to be used as an operational warship and pointed out that the Chinese Navy was concentrating on submarines. The Soviet carriers Kiev and Minsk had also been sold to China as tourist attractions.

In January 2015, further details emerged in an interview with Hong Kong-based businessman Xu Zengping by the South China Morning Post. Xu, a former military basketball player, reported that he had been commissioned by the PLAN to purchase the vessel on its behalf, with the floating hotel and casino as a cover story. He was warned that the Chinese Navy did not have the budget to buy the ship, and the Chinese government did not support the purchase. However, Xu was so impressed when touring the ship that he resolved to purchase it using his personal funds. The previous year, Xu had borrowed HK$230 million from a Hong Kong business friend, spending HK$6 million to create Chong Lot as a Macau shell corporation. He described a harrowing negotiation in Kiev, lubricated by bribery and liquor, which helped to arrange victory at the auction. As a precaution, he shipped 40 tonnes of the carrier's blueprints to China overland in eight trucks.

The passage from Ukraine to China was even more troublesome than the purchase. In June 2000, Varyag was taken under tow. As the tugboat approached the Bosphorus, Turkey denied permission for the ship to pass through, citing the risk that a gust of wind would turn the ship widthwise and block the entire strait. Varyag spent the next 16 months being towed around the Black Sea, accruing towing charges of $8,500 a day as Chong Lot stopped paying its bills. The tugboat operator compared its fate to the Yellow Fleet that was stuck in the Suez Canal for eight years, and French thrillseekers even landed a helicopter on the ship. Meanwhile, Chinese officials negotiated with Turkey, offering trade and tourism concessions.

In August 2001, Turkey relented and agreed to allow the ship to pass. On 1 November 2001, the Bosphorus was cleared of all other traffic as Varyag was towed through. On 2 November, Varyag also passed through the Dardanelles without incident. On 4 November, Varyag was caught in a force 10 gale and broke adrift while passing the Greek island of Skyros. The ship was taken back under tow on 6 November, after one sailor died while attempting to attach the tow lines.

The Suez Canal does not permit passage of «dead» ships – those without an on-board power source – so the hulk was towed through the Strait of Gibraltar, around the Cape of Good Hope, and through the Straits of Malacca at an average speed of 6 knots (11 km/h) across the 15,200-nautical-mile (28,200 km) journey. The tugboat fleet called for supplies en route at Piraeus, Greece; Las Palmas, Canary Islands; Maputo, Mozambique; and Singapore. Varyag entered Chinese waters on 20 February 2002, and arrived 3 March at the Dalian naval shipyard in northeast China. The costs included $25 million to the Ukrainian government for the hull, nearly $500,000 in transit fees and $5 million for 20 months of towing fees.

Xu Zengping estimated in 2015 that his total out of pocket cost was at least US$120 million. He insisted that he had never been reimbursed by the Chinese government, and had spent the last 18 years repaying his debts, in part by selling properties such as his home. A source familiar with the acquisition explained that the naval official, Ji Shengde, who initiated the mission had been in prison because of smuggling.

Contrary to initial reports that the ship had no engines, Xu reported that all four original engines remained intact at the time of purchase, but had been shut down and preserved in grease seals. A refit restored them to working order in 2011.

701st Institute was tasked to redesign Varyag with Zhu Yingfu and Wu Xiaoguang were assigned respectively as the general designer and deputy general designer. Wang Zhiguo was assigned as the general system engineer, and Yang Lei was assigned the general supervisor. The workload of converting Varyag for operational use was equivalent to building ten new destroyers. Varyag was moved in June 2005 to a dry dock at Dalian. Her hull was sandblasted, scaffolding erected, and the ship's island was painted in a red marine primer to treat metal corrosion.

Observers have noted the installation of Type 348 active electronically scanned array (AESA) Radar (four arrays) and Sea Eagle radar. The air defence system consists of the Type 1130 CIWS and the FL-3000N missile system. The anti-ship missile tubes would not be used, freeing up internal space for hangar or storage use.

On 8 June 2011, General Chen Bingde made the first public acknowledgement of the ship's refit. On 27 July 2011, the Chinese Defence Ministry announced it was refitting the vessel for «scientific research, experiment and training».

The ship undertook her first sea trials from 10 August 2011 to 15 August 2011. The carrier completed sea trials in early August 2012 and loaded Shenyang J-15 aircraft and KJ-88, YJ-83K and YJ-91 missiles in preparation for weapons systems trials.

On 23 September 2012, the aircraft carrier was handed over to the PLAN, and was commissioned on 25 September 2012. At the commissioning ceremony, the carrier was officially named Liaoning, in honour of the province in which she was retrofitted. On 26 December 2012, the People's Daily reported that it would take four to five years for Liaoning to reach full capacity. As it is currently a training ship, Liaoning is not assigned to any of China's operational fleets.

According to geopolitical analysts, China could use Liaoning and its future carriers to intimidate other smaller countries that have territorial claims in the South China Sea, as well as extending air control further south of the disputed region. In December 2016 the ship exercised in the Western Pacific, including passing through the Miyako Strait between the Japanese islands of Miyako-jima and Okinawa. On 18 April 2018, Liaoning took part in the navy's live-fire exercises in the South China Sea, involving 76 fighter jets and 48 warships and submarines. The drills came after a large military display presided over by Chinese paramount leader Xi Jinping, and were condemned by Taiwan as «military intimidation».

In August 2018, South China Morning Post reported that Liaoning was berthed at Dalian undergoing its first refit since it's commissioning in 2012. The radar above Liaoning’s bridge and the air traffic control at the rear of the island superstructure was noted to have been removed, and scaffolding was also noted around the command center. On 21 January 2019, Global Times reported that Liaoning had completed maintenance and modifications which lasted more than half a year, and had departed Dalian for a possible sea trial in the north Yellow Sea near Dalian, noting that changes were made to the superstructure.

On 25 November 2012, China announced that J-15s had made five successful arrested landings on Liaoning. In June 2013, a second round of flight tests began on board Liaoning, with personnel from the fleet air arm of the Brazilian Navy providing carrier training support to the People’s Liberation Army Navy Air Force who operate the J-15s.