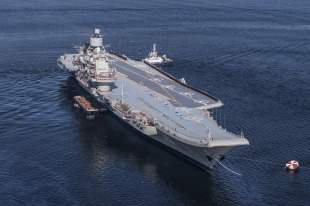 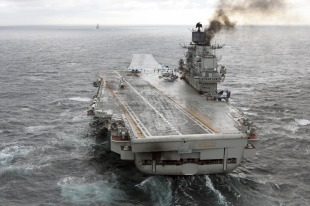 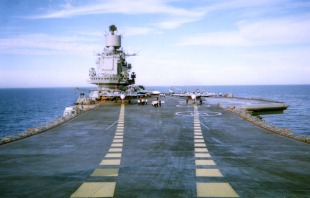 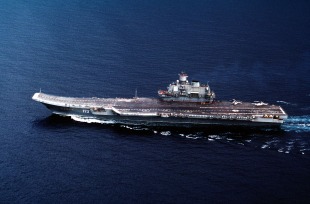 Admiral Flota Sovetskogo Soyuza Kuznetsov is an aircraft carrier (heavy aircraft cruiser in Russian classification) serving as the flagship of the Russian Navy. It was built by the Black Sea Shipyard, the sole manufacturer of Soviet aircraft carriers, in Nikolayev within the Ukrainian Soviet Socialist Republic (SSR). The initial name of the ship was Riga; it was launched as Leonid Brezhnev, embarked on sea trials as Tbilisi, and finally named Admiral Flota Sovetskogo Soyuza Kuznetsov.

It was originally commissioned in the Soviet Navy, and was intended to be the lead ship of the two-ship Admiral Kuznetsov class. However, its sister ship Varyag was still incomplete when the Soviet Union disbanded in 1991. The second hull was eventually sold by Ukraine to China, completed in Dalian and commissioned as Liaoning.

The design of Admiral Kuznetsov class implies a mission different from that of the United States Navy's carriers. The term used by her builders to describe the Russian ships «heavy aircraft-carrying cruiser» – intended to support and defend strategic missile-carrying submarines, surface ships, and naval missile-carrying aircraft of the Russian Navy.

Admiral Kuznetsov's main fixed-wing aircraft is the multi-role Sukhoi Su-33. It can perform air superiority, fleet defence, and air support missions and can also be used for direct fire support of amphibious assault, reconnaissance and placement of naval mines. The carrier also carries the Kamov Ka-27 and Kamov Ka-27S helicopters for anti-submarine warfare, search and rescue, and small transport.

For take-off of fixed wing aircraft, Admiral Kuznetsov uses a ski-jump at the end of her bow. On take-off aircraft accelerate toward and up the ski-jump using their afterburners. This results in the aircraft leaving the deck at a higher angle and elevation than on an aircraft carrier with a flat deck and catapults. The ski-jump take-off is less demanding on the pilot, since the acceleration is lower, but results in a clearance speed of only 120–140 km/h (75–87 mph) requiring an aircraft design which will not stall at those speeds. The «cruiser» role is facilitated by Admiral Kuznetsov's complement of 12 long-range surface-to-surface anti-ship P-700 Granit (NATO reporting name: Shipwreck) cruise missiles. As a result, this armament is the basis for the ship's Russian type designator of «heavy aircraft-carrying missile cruiser».