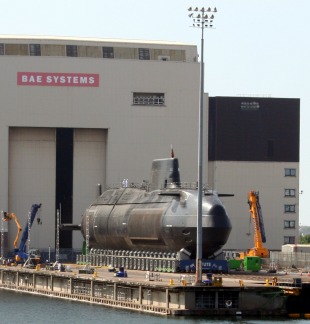 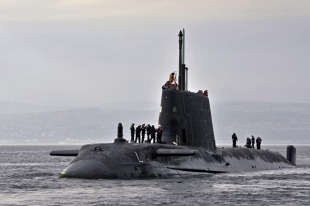 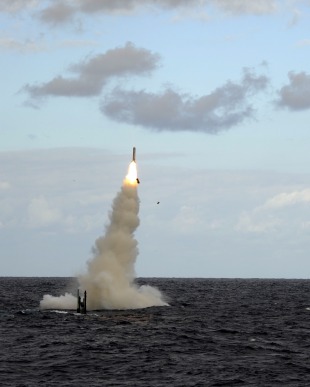 HMS Astute is an operational nuclear-powered attack submarine in the Royal Navy, the lead ship of her class.

Astute is the second submarine of the Royal Navy to be named after the characteristic of shrewdness and discernment—the first was the World War II-era Amphion-class Astute. She was the largest attack submarine in Royal Navy history when commissioned in 2010.

Built as a successor to the Trafalgar class, Astute is 50% larger than the T-boats but has a smaller crew. The 7,400-tonne Astute's nuclear reactor will not need to be refuelled during the vessel's 25-year service. Since the submarine can purify water and air, she is able to circumnavigate the planet without resurfacing. The main limit is that the submarine can only carry three months' supply of food for 98 crew.

Astute has stowage for 38 weapons and was expected to typically carry both Spearfish heavy torpedoes and Tomahawk Block IV cruise missiles, the latter costing £870,000 each.

Astute was ordered from GEC's Marconi Marine (now BAE Systems Submarine Solutions) on 17 March 1997. She was laid down at BAE's submarine facility in Barrow-in-Furness on 31 January 2001, 100 years to the day after the keel was laid down for the Royal Navy's first submarine Holland 1. She was the first submarine built in the UK since HMS Vengeance (launched in 1998).

Astute was launched on 8 June 2007 by the Duchess of Cornwall, 43 months behind schedule. The launch attracted more than 10,000 spectators. Her builders BAE Systems described her as «the largest and most able attack submarine that the Royal Navy has operated, with a performance to rival any in the world».

On 16 February 2010 Astute left Faslane for sea trials and dived for the first time on 18 February 2010. HMS Astute was commissioned on 27 August 2010, when she was given her HMS prefix, in a ceremony watched over by her patron the Duchess of Cornwall. She was delivered to the Royal Navy on 18 July 2013 and at that time was reported to be, «nearing the end of her sea trials.» In reality, the Royal Navy declared Astute to be fully operational in May 2014, some 13 years after being laid down.

Astute departed Faslane on her maiden deployment at the beginning of 2014, spending eight months abroad. Her deployment included an attached dry deck shelter aft of the sail, possibly for an SBS troop deployment. Astute returned to Faslane in October 2014. After the 2020 Iranian attack on U.S. forces in Iraq, Astute was deployed to the Middle East.