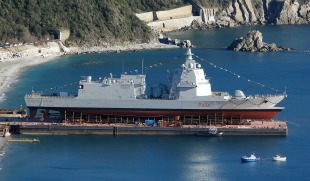 Italian Navy ordered the new MBDA TESEO MK/2E heavy-duty missile (TESEO «EVO»), a long-range anti-ship missilewith also strategic land attack capability. The missile will have a new terminal «head» with dual RF seeker (Radio Frequency) and, presumably, given the need to even attack ground targets, IIR (Imaging IR). Compared to the predecessor OTOMAT/TESEO, the TESEO «EVO» MK/2E has a double range or more than 360 km. Former OTOMAT is accredited for a range of action of more than 180 km.

Giovanni delle Bande Nere was laid down on 28 August 2019 at Fincantieri Muggiano and was launched on 12 February 2022. It is expected to be commissioned in October 2024.