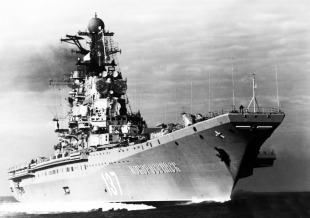 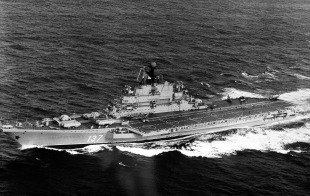 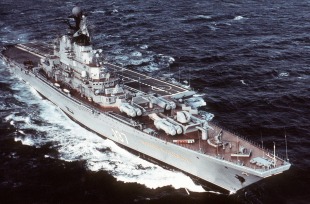 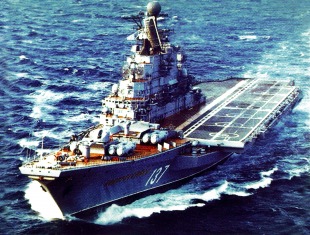 Novorossiysk was a conventionally powered aircraft carrier (heavy aircraft cruiser in Russian classification) that served the Soviet Navy and the Russian Navy from 1982 to 1993. She was the third Kiev-class vessel to be built. She was designed to engage in offensive actions as a guided missile cruiser mostly using her deck mounted missiles as well as support anti-submarine and surface actions with her embarked air group.

Novorossiysk was laid down at the former Soviet Black Sea Shipyard in Mykolaiv, Ukraine, on 30 September 1975, launched on 24 December 1978, commissioned on 12 September 1982, and decommissioned in June 1993. The third ship in her class, she served in the Soviet Pacific Fleet.

In March 1985, Novorossiysk and escorting battle group departed the Sea of Japan, sailed to the south of Okinawa and then east across the Pacific. After approximately eight days, the ships turned and headed northwest toward the Kuril Islands, simulating an enemy carrier strike against the Soviet Union. As the Novorossiysk approached the islands, about 700 miles (1,100 km) east of Japan, Soviet Bear bombers flew reconnaissance missions near the battle group and helped vector some 20 Backfire bombers to their targets, practising the Soviet strategy of bomber launched anti-ship missile warfare. A U.S. Navy description of the Novorossisysk exercise notes that «The force was hit by simulated air strikes and probably by submarines firing torpedoes and cruise missiles from 1,120 km east of Japan, on 14 April. They came at it with submarines and aircraft--everything they had.» The Novorossiysk made its last voyage in Mid-1991 just before the break of the U.S.S.R.

In 1995 the Novorossiysk hulk, which had suffered a serious engine room fire two years back, was sold for scrapping, and was broken up in 1997 at Pohang, South Korea.