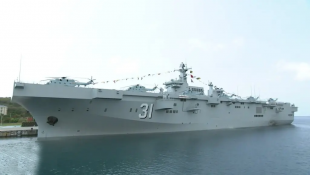 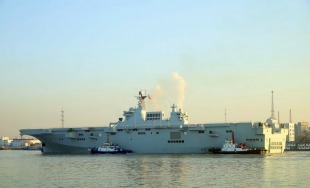 Hainan (31) is the lead ship of the Type 075 landing helicopter dock of the People's Liberation Army Navy. She was commissioned on 23 April 2021.

The Type 075 is a large-scale amphibious assault ship of the Chinese People's Liberation Army Navy. This ship is the largest amphibious warship of the People's Liberation Army Navy. It has a hangar and can carry nearly 30 helicopters of various types. It has a through deck and can take off and land multiple helicopters at the same time. There is a dock, which can be used as a mother ship for amphibious vehicles, landing craft, and air-cushioned landing craft (LCAC), and can transport soldiers, infantry fighting vehicles, tanks, etc. for landing operations.

The Type 075 is China's all-through deck amphibious assault ship. The demonstration work was initiated in 2011. The comprehensive development project was established around 2013.

It was researched and designed by the 708 Research Institute of the China Shipbuilding Industry Corporation; previously almost all amphibious warships of the Chinese Navy were built by the design of the institute, including the Type 071 amphibious transport dock, the Type 072, Type 073, and Type 074 classes of landing ships, and the Type 726 LCAC. After the Type 075 started its program demonstration in 2011, several revisions were made during the period. During this period, the headquarters and the navy had different opinions: In 2016, the General Armed Forces Department recommended that the Type 075 adopt a non-through deck superstructure, but the Chinese Navy insisted on connecting it. Offset deck superstructure (same as all-through decks and offset islands of foreign amphibious assault ships), and finally adopted the navy's opinion and put it into practice.

Hainan was the first ship of the class and laid down in 2018 and launched on 25 September 2019 at the Hudong Shipyard in Shanghai. On 23 April 2021, the ship was commissioned into the South Sea Fleet.