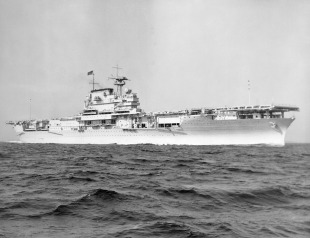 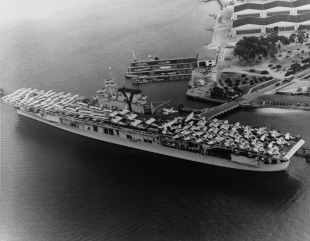 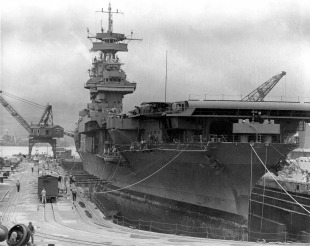 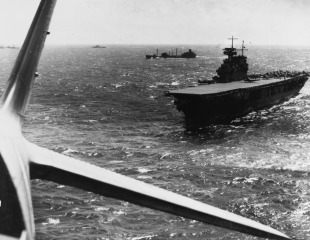 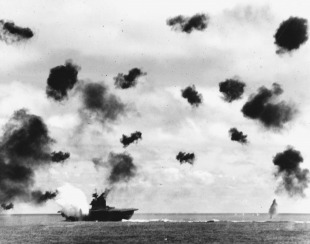 Namesake:
After the Battle of Yorktown in 1781
Operator:

USS Yorktown (CV-5) was an aircraft carrier commissioned in the United States Navy from 1937. The lead ship of the Yorktown class which was designed after lessons learned from operations with the large converted battlecruiser Lexington class and the smaller purpose-built USS Ranger.

Together with the carrier Lexington, she successfully attacked Japanese shipping off the east coast of New Guinea in early March 1942. Her aircraft sunk or damaged several warships supporting the invasion of Tulagi in early May. Yorktown rendezvoused with Lexington in the Coral Sea and attempted to stop the invasion of Port Moresby, Papua New Guinea. They sank the light aircraft carrier Shōhō on 7 May during the Battle of the Coral Sea, but did not encounter the main Japanese force of the carriers Shōkaku and Zuikaku until the next day. Aircraft from Lexington and Yorktown badly damaged Shōkaku, but the Japanese aircraft critically damaged Lexington (which was later scuttled), and Yorktown damaged.

Despite the damage suffered, Yorktown was able to return to Hawaii. Although estimates were that the damage would take two weeks to repair, Yorktown put to sea only 48 hours after entering drydock at Pearl Harbor, which meant that she was available for the next confrontation with the Japanese. Yorktown played an important part in the Battle of Midway in early June. Yorktown's aircraft played crucial roles in sinking two Japanese fleet carriers. USS Yorktown also absorbed both Japanese aerial counterattacks at Midway which otherwise would have been directed at the carriers USS Enterprise and Hornet. On June 4 during the Battle of Midway, Japanese aircraft crippled Yorktown. She lost all power and developed a 23-degree list to port. Salvage efforts on Yorktown were encouraging, and she was taken in tow by USS Vireo. In the late afternoon of 6 June, the Japanese submarine I-168, fired a salvo of torpedoes, two of which struck Yorktown, and a third sinking the destroyer USS Hammann, which had been providing auxiliary power to Yorktown. With further salvage efforts deemed hopeless, the remaining repair crews were evacuated from Yorktown, which sank just on the morning of 7 June.

On 19 May 1998, the wreck of Yorktown was found and photographed by oceanographer Dr. Robert Ballard, discoverer of the wrecks of the RMS Titanic and the German battleship Bismarck. The wreck of Yorktown, 5 km beneath the surface, was sitting upright on the bottom in excellent condition although she had spent 56 years on the deep-sea floor; much paint and equipment were still visible. As of July 13, 2019, there have not been any follow-up expeditions to the Yorktown's wreck.