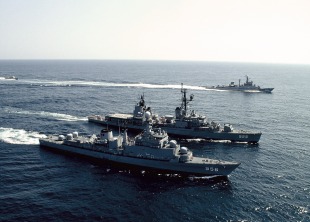 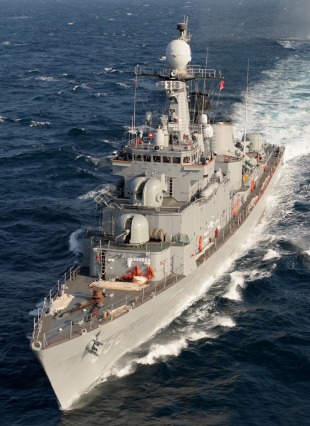 ROKS Gyeongbuk (FF-956) is the fifth ship of the Ulsan-class frigate in the Republic of Korea Navy. She is named after the province, Gyeongbuk. In the early 1990s, the Korean government plan for the construction of next generation coastal ships named Frigate 2000 was scrapped due to the 1997 Asian financial crisis. But the decommissioning of the Gearing-class destroyers and the aging fleet of Ulsan-class frigates, the plan was revived as the Future Frigate eXperimental, also known as FFX in the early 2000s. ROKS Gyeongbuk (FF-956) is an Ulsan-class (Flight II) guided missile frigate built by Daewoo Shipbuilding & Marine Engineering. She was decommissioned on 24 December 2019 and expected to be used as in training exercises.