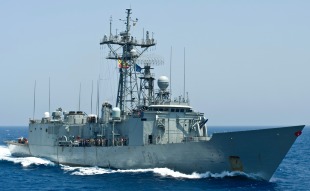 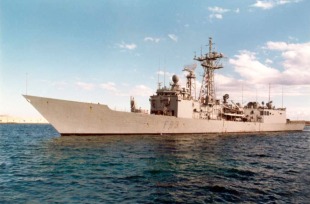 Numancia (F83) is the third of the six Spanish-built Santa Maria-class frigates, based on the American Oliver Hazard Perry class design, of the Spanish Navy.

Laid down on 8 January 1986, and launched on 29 January 1987, Numancia was commissioned in service on 17 November 1989. She was the frigate long-hull variant (Flight II). All of these Spanish frigates have the length of the later Oliver Hazard Perry frigates, and have a wider beam than the US Navy design, and are therefore able to carry more top weight. Fin stabilizers are fitted.