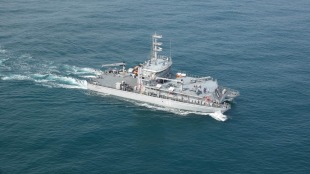 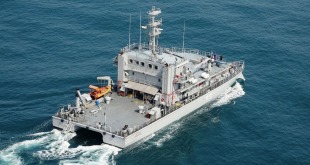 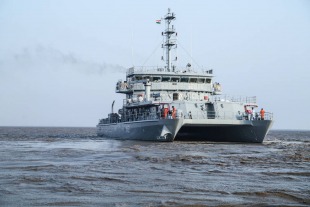 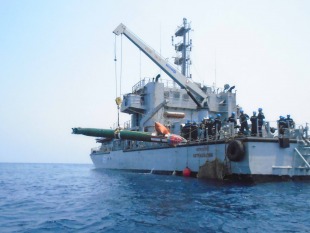 INS Astradharini (translated as «she who keeps weapons») is an indigenously designed and built torpedo launch and recovery vessel built by Shoft Shipyard for the Indian Navy. The Ship is an indigenously built Torpedo Launch and Recovery Vessel with unique catamaran hull form conceptualised by the Naval Science and Technological Laboratory, Visakhapatnam. She was commissioned to Navy Service on 6 October 2015 at the Naval Base in Visakhapatnam. After commissioning, the ship entered the Eastern Naval Command.

The vessel is a replacement of INS Astravahini that was built by Goa Shipyard Limited and P.S. and Company for the Indian Navy. It was decommissioned on 17 July 2015 after 31 years of service. INS Astradharini will be used to carry out the technical trials of underwater weapons and systems like torpedoes and mines.

In addition, the vessel features a large deck area with torpedo launchers for deploying and recovering several of torpedoes during the trials. The ship’s crest depicts a Blue and Black ‘Sea Horse’ with the characteristic curved tail against a Blue background. This has relevance to Indian mythology, where it is identified as Lord Varun’s 'Vahana'. The crew plays a pivotal role by supporting indigenous R&D capabilities in accordance with their motto ‘Progression with Every Mission’.