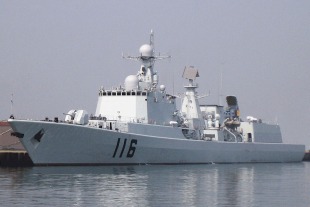 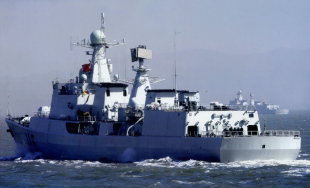 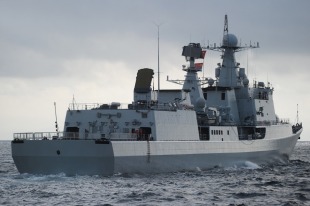 Shijiazhuang (116) is second ship of Type 051C destroyer of the People's Liberation Army Navy. She was commissioned on 22 January 2007.

The Type 051C destroyers were constructed at Dalian Shipyard and was revealed in 2004. They uses the advanced Russian S-300FM air defence missile system with track-via-missile homing guided by a single Tombstone radar. The missile has a maximum range of 150 km and an operating altitude of 10 m — 27 km.

The anti-ship abilities possessed by the Luzhou class includes 8 indigenous YJ-83 (C-803) Anti-ship missiles. This anti-ship missile has a range of 150+ km and approaches its target in sea skimming mode at a speed of Mach 1.5. As a secondary role, the missile can also be used against land targets.

The ship uses two Type 730 CIWS guns for air defence. The Type 730 is a highly effective CIWS that is also installed on the Type 052B (Guangzhou class) and Type 052C/052D destroyers, and the Type 054A (Jiangkai II class) frigates. The ship also has 100 mm gun based on a French design for use against surface targets.