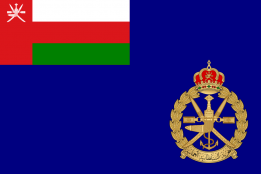 The Royal Navy of Oman, abbreviated RNO, is the maritime component of the Royal Armed Forces of the Sultanate of Oman. Given its long coastline and strategic location along the Indian Ocean, as well as being close to the Strait of Hormuz, the Royal Navy is one of the priorities of the government of Oman. It has a fleet of gunboats, fast missile boats and support, training, cargo and hydro-graphical survey vessels, which can be deployed to defend the territorial waters and coastline of Oman as well as protect tankers passing through the Strait of Hormuz. The Royal Navy's headquarters are in As Sib, several miles west of Muscat, the capital. A modernization program is ongoing, with the objective of creating a first rate fleet.