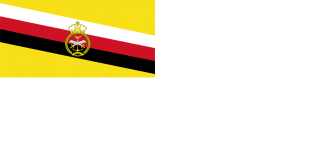 The Royal Brunei Navy (Malay: Tentera Laut Diraja Brunei, abbreviated TLDB) is the naval defence force of Brunei Darussalam. It is a small but relatively well-equipped force whose main responsibility is to conduct search and rescue missions and to deter and defend the Brunei waters against attack mounted by sea-borne forces.

The Royal Brunei Navy was established on 14 June 1965, the second unit created after The Royal Brunei Armed Forces. The RBN is based in Muara, which is situated 4 km from Muara Town with the majority of the crews being Malays. Since 1977, The Royal Brunei Navy has been equipped with missile gun boats and other coastal patrol craft. All the ships names are prefixed KDB as in Kapal Diraja Brunei (Royal Brunei Ship in Malay).