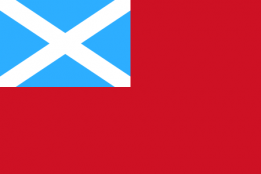 The Royal Scots Navy (or Old Scots Navy) was the navy of the Kingdom of Scotland from its origins in the Middle Ages until its merger with the Kingdom of England's Royal Navy per the Acts of Union 1707. There are mentions in Medieval records of fleets commanded by Scottish kings in the twelfth and thirteenth centuries. King Robert I (1274-1329, reigned 1306-1329), developed naval power to counter the English in the Wars of Independence (1296-1328), and after the establishment of Scottish independence continued to build up naval capacity. In the late fourteenth century naval warfare with England was conducted largely by hired Scots, Flemish and French merchantmen and privateers. King James I (1394-1437, reigned 1406-1437), took a greater interest in naval power establishing a shipbuilding yard at Leith and probably created the office of Lord High Admiral.

King James IV (1473-1513, reigned 1488-1513), put the enterprise on a new footing, founding a harbour at Newhaven, near Edinburgh and a dockyard at the Pools of Airth. He acquired a total of 38 ships including the Great Michael, at that time, the largest ship in Europe. Scottish ships had some success against privateers, accompanied the king on his expeditions in the islands and intervened in conflicts in Scandinavia and the Baltic Sea, but were sold after the Flodden campaign. Thereafter Scottish naval efforts would rely on privateering captains and hired merchantmen. Despite truces between England and Scotland there were periodic outbreaks of a guerre de course. James V built a new harbour at Burntisland in 1542. The chief use of naval power in his reign were a series of expeditions to the Isles and France.

The Union of Crowns in 1603 ended Scottish conflict with England, but involvement in England's foreign policy opened up Scottish shipping to attack. In 1626, a squadron of three ships were bought and equipped for protection and there were several marque fleets of privateers. In 1627, the Royal Scots Navy and privateers participated in the Siege of Saint-Martin-de-Re with a major expedition to the Bay of Biscay in 1627. The Scots also returned to the West Indies and in 1629 took part in the capture of Quebec. After the Bishop's Wars and the alliance with Parliament in the English Civil War, a «Scotch Guard» was established on the coast of Scotland of largely English ships, but with Scottish revenues and men, gradually becoming a more Scottish force. The Scottish naval forces were unable to resist the Oliver Cromwell's navy and when Scotland became part of the Commonwealth in 1653, they were absorbed into the Commonwealth navy. After the Restoration Scottish seamen received protection against arbitrary impressment, but a fixed quota of conscripts for the English Royal Navy was levied from the sea-coast burghs. Royal Navy patrols were now found in Scottish waters even in peacetime. In the Second (1665–1667) and Third Anglo-Dutch Wars (1672–1674) between 80 and 120 captains, took Scottish letters of marque and privateers played a major part in the naval conflict. In the 1690s, a small fleet of five ships was established by merchants for the Darien Scheme, and a professional navy of three warships was established to protect local shipping in 1696. After the Act of Union in 1707, these vessels and their crews were transferred to the British Royal Navy.