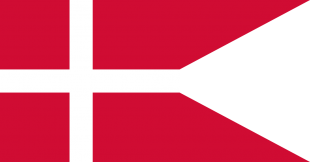 The history of the Danish navy began with the founding of a joint Dano-Norwegian navy on 10 August 1510, when King John appointed his vassal Henrik Krummedige to become «chief captain and head of all our captains, men and servants whom we now have appointed and ordered to be at sea.»

The joint fleet was dissolved when Christian Fredrick established separate fleets for Denmark and Norway on 12 April 1814. These are the modern ancestors of today's Royal Danish Navy and Royal Norwegian Navy.

The primary task of the fleet in the first period of its existence was to counter the power of the Hanseatic League and secure control in the Baltic Sea. The fleet was one of the largest in Europe under Christian IV with 50-60 larger battle ships and a large number of defensive ships. In the 17th and 18th centuries during the period of absolutism its primary aim was to control the Strait of Øresund against Sweden. In this period it consisted of 20 ships of the line with an average of 60 guns, plus 20-40 frigates, large enough to counter the Royal Swedish Navy at the time. The number of guns on the ships of the line was smaller than the average number of the great sea powers of the time, but it was partly a deliberate decision of the admiralty, in order to make the ships able to navigate in the countless narrow waters around the Danish isles.

The navy was considered to be the King's personal property, and «the King's waters» consisted of the sea off Norway, Denmark, the Faroe Islands, Iceland and Greenland, large parts of the Baltic, the waters east of the North Cape and off Spitsbergen. For the entire period of its existence its main base was Holmen in Copenhagen, but on different occasions smaller task forces was stationed in Fredriksvern in Norway and in Glückstadt.

During peace time most of the navy personnel served in the merchant fleet, which was of a considerable size in the 18th century. The main problem for Denmark-Norway in case of war was thus often to round up the required number of skilled sailors for the navy.

The navy was for a large part funded by Norwegian means as a royal resolution dictated that the income from Norway was to be used towards its construction and upkeep.

The majority of the ships of the line in the 17th and 18th centuries were named after the royalty of Denmark-Norway, as well as the lands of the kingdoms. At the end of the 18th century it became more common to name them in a national romantic vein, using names from the history of Denmark and from the Old Norse mythology.