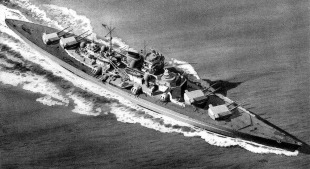 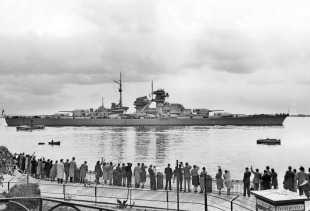 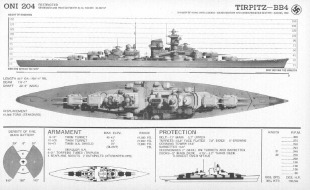 The Bismarck class was a pair of battleships built for Nazi Germany's Kriegsmarine shortly before the outbreak of World War II. The ships were the largest warships built for the Kriegsmarine. Bismarck was laid down in July 1936 and completed in September 1940, while her sister Tirpitz's keel was laid in October 1936 and work finished in February 1941.

Both ships had short service careers. Bismarck conducted only one operation, Operation Rheinübung, a sortie into the North Atlantic to raid supply convoys sent from North America to Great Britain. During the operation, she destroyed the British battlecruiser HMS Hood and damaged the new battleship Prince of Wales in the Battle of the Denmark Strait. Bismarck was defeated and sunk in a final engagement after a three-day chase by the Royal Navy. Disagreements over the cause of the sinking persist with chiefly British sources claiming responsibility for the sinking of the ship. Evidence reviewed by Robert Ballard and James Cameron indicates that her loss was most likely due to scuttling as originally claimed by her surviving crew-members.

Tirpitz's career was less dramatic; she was sent to Norwegian waters in 1942, where she acted as a fleet in being, threatening the convoys from Britain to the Soviet Union. She was repeatedly attacked by the Royal Navy and Royal Air Force. In 1944, Lancaster bombers hit the ship with three Tallboy bombs, which caused extensive internal damage and capsized the battleship. Tirpitz was broken up for scrap between 1948 and 1957.