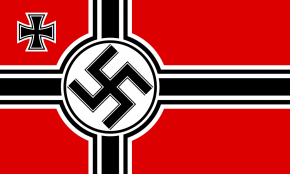 The Kriegsmarine was the navy of Germany from 1935 to 1945. It superseded the Imperial German Navy of the German Empire (1871–1918) and the inter-war Reichsmarine (1919–1935) of the Weimar Republic. The Kriegsmarine was one of three official branches, along with the Heer (Army) and the Luftwaffe (Air Force), of the Wehrmacht, the armed forces of National Socialist-controlled Germany from 1933 to 1945.

The Kriegsmarine grew rapidly during German naval rearmament in the 1930s (the Treaty of Versailles of 1919 had limited the size of the German navy previously, and prohibited building of submarines). Kriegsmarine ships were deployed to the waters around Spain during the Spanish Civil War (1936–1939) under the guise of enforcing non-intervention, but in reality supporting the Nationalist side of Generalissimo Francisco Franco (1892–1975, in power 1939–1975), of the civil war against the Spanish Republicans.

In January 1939 Plan Z was ordered, calling for surface naval parity with the British Royal Navy by 1944. However, when World War II broke out in September 1939, Plan Z was shelved in favour of a crash building program for submarines (U-boats) instead of capital surface warships and prioritizing land and air forces.

The Commander-in-Chief of the Kriegsmarine (as for all branches of armed forces during the period of absolute Nazi power) was the President and Reichs Chancellor, now renamed «Fuehrer» Adolf Hitler (1889–1945, in power 1933–1945), who exercised his authority through the Oberkommando der Marine.

The Kriegsmarine's most famous ships were the U-boats, most of which were constructed after Plan Z was abandoned at the beginning of World War II. Wolfpacks were rapidly assembled groups of submarines which attacked British convoys during the first half of the Battle of the Atlantic but this tactic was largely abandoned by May 1943. Along with the U-boats, surface commerce raiders (including auxiliary cruisers) were used to disrupt Allied shipping in the early years of the war, the most famous of these being the heavy cruisers Admiral Graf Spee and Admiral Scheer and the battleship Bismarck. However, the adoption of convoy escorts, especially in the Atlantic, greatly reduced the effectiveness of surface commerce raiders against convoys.

After the Second World War in 1945, the Kriegsmarine's remaining ships were divided up amongst the Allied powers and were used for various purposes including minesweeping.