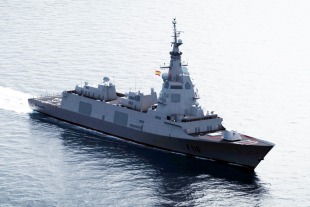 The F110 class, also known as the Bonifaz class, are a multi-purpose, anti-submarine class of Aegis combat system-fitted heavy frigates under construction for the Spanish Navy. The project is being co-developed by the Spanish Ministry of Defence and the state-owned company Navantia. The construction of the first unit started in April 2022 and are scheduled to be delivered starting in about 2025.

On 6 April 2022, an official act was carried out that began the construction of the first of the units.

The vessel will be seven centimetres (2.8 in) shorter than the F100 and will have a narrower beam of 18 m, 59 ft against 18.6 m, 61 ft of the F100. It can perform humanitarian and combat operations. The superstructure of the vessel will be integrated. It is not yet defined if it will carry an AEGIS system with an AN/SPY-1 radar of version D(V), carried by the Spanish frigate Cristóbal Colón, or F(V) model carried by the Norwegian frigates of the Fridtjof Nansen class or of another type, although the company intends to install any type of product that future customers require. What is certain is that the SCOMBA system will be installed.

To make it more difficult to locate by radar or thermal imaging, the class will have some stealth capacity that masts or blocks of sensors will not be installed on the superstructure. It will have a single gas escape zone that will be installed in the upper deck, and the air intakes will be placed in line with the superstructure. The loading area shall be designed below the flight area with the installation of a downhill ramp on the starboard side. There is a possibility of using an output device similar to that used by the Danish logistical support vessels of the Absalon class.

The ship's hull will be made of steel. The material of the superstructure is not yet defined, although it is likely to be a composite material instead of aluminium.

Spanish Navy
Navantia
Under construction
6,100 t
145 m
35 knots
150
No comments yet
Log in or Register to write comments
Top 5 biggest