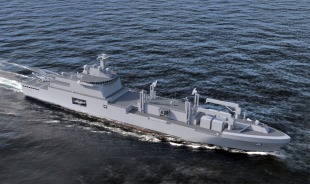 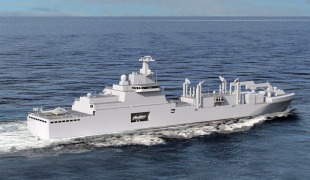 The Jacques Chevallier-class replenishment ship, are a class of future fleet tankers that are to replace the Durance-class units in French Navy service. Until January 2019, the programme was known as Flotte logistique (abbreviated FLOTLOG in military parlance). Delivery of the first unit of the series had been expected in late 2022. However, in 2021 it was indicated that the delivery date for the first ship had slipped to 2023.

Replacement for the Durance type has been considered by the French Navy since 2009, with the military procurement law for years 2009–2014. At the time, the concept was knows as «flotte logistique» («logistical fleet», or FLOTLOG). The succession was envisioned to take place between 2017 and 2020. The replacement was motivated both by the age of the Durance hulls, and by their non-conformity with current safety standards, notably the lack of a double hull. From 2010, Naval Group (the still named DCNS) proposed a project named BRAVE. This project was carried over to the following procurement law (2014 to 2019), delaying the order of the first unit to 2019. However, after STX France was purchased by Fincantieri, the project by Naval Group was abandoned and it was decided to base the new concept on the Italian fleet tanker Vulcano, then being built by Fincantieri for the Italian Navy. The FLOTLOG programme was further confirmed in the new military procurement law.

The four units of the class are to be constructed in Saint-Nazaire, at Chantiers de l'Atlantique. Building of the first ship was initially planned for early 2020 for delivery in 2022, with the three further ships being delivered from 2013 through 2029. In 2021, it was indicated that delivery of the first ship had slipped to 2023. The steel cutting ceremony for the first ship took place on 18 May 2020. The ship was launched in April 2022 and sea trials were expected toward the end of the year.

When completed, these ships will be among the largest units of the French Navy, second only to the aircraft carrier Charles de Gaulle.