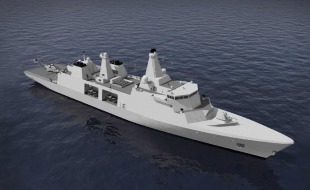 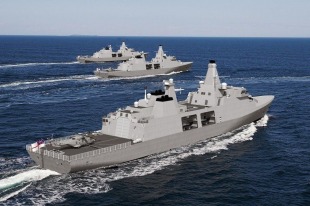 The Type 31 frigate or Inspiration class, and formerly known as the Type 31e frigate or General Purpose Frigate (GPF), is a planned class of frigate intended to enter service with the United Kingdom's Royal Navy in the 2020s alongside the submarine-hunting Type 26 frigate. Designed by Babcock International, it is also marketed under the name Arrowhead 140 and was based on the hull of the Iver Huitfeldt-class frigate.

It is intended that the Type 31 frigate will replace some of the general-purpose Type 23 frigates. The Type 31 is part of the British government's «National Shipbuilding Strategy».

In order to maintain national shipbuilding capacity, the 2017 national shipbuilding strategy proposed ordering an initial batch of five Type 31e frigates with an initial in-service date in 2023, with their cost limited to a maximum of £250m each, to be followed by a second batch order of Type 31 for the Royal Navy. The Type 31 is projected to be built in modular form as with the Queen Elizabeth-class carriers at several commercial shipyards, and assembled in one central yard.

It was announced on 12 September 2019 that the Arrowhead 140 design had been selected for the Type 31 frigate. A contract was formally awarded to Babcock on 15 November 2019, for an average production cost of £250 million per ship and an overall programme cost set to be £2 billion with £1.25 billion value to Babcock.

A September 2017 graphic released by the Royal Navy stressed modular adaptability and flexible construction of the design for export opportunities. Core requirements of the Type 31e frigate include a medium calibre gun, point defence systems, hangar and a flight deck for Wildcat or ten tonne helicopter operated by a crew of around 100 with space for 40 more personnel. The British government released a Request for information (RFI) in September 2017, detailing the desired characteristics of the Type 31e. The RFI provides greater details such as a «Medium Calibre Gun» of greater than 57 mm (2.2 in), a point defence anti-air missile system and the optional ability to launch and recover unmanned aerial vehicles. Forces News reported that the design will contain Sea Ceptor missiles, an advanced air and surface surveillance and target indication radar such as the Thales NS100 and be able to operate either an AgustaWestland Wildcat HMA2 or an AgustaWestland Merlin HM2. On 1 October 2020, BAE Systems announced it was under contract to supply five Bofors 57 Mk3 medium calibre guns and ten Bofors 40 Mk4 small calibre guns to the Royal Navy for the first five Type 31 frigates.

On 30 June 2021, it was reported that Babcock was in discussions with Greece, Indonesia, Poland and two other countries about potential Type 31 contracts.

On 16 September 2021, Babcock announced that it had signed an agreement with PT PAL Indonesia allowing it to design two Type 31 derivatives for the Indonesian Navy.