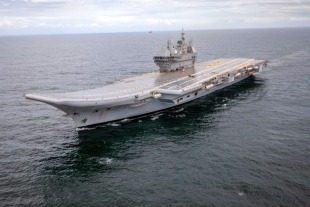 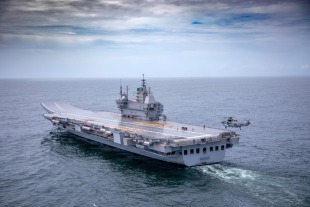 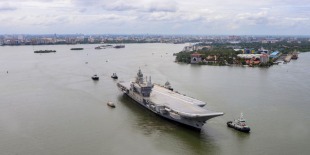 The first steel was cut for the lead ship, INS Vikrant, in April 2005. Its keel was laid down in February 2009, and it is scheduled to be launched in mid-2011 and commissioned in 2014. The second indigenous aircraft carrier (IAC-2) is expected to be ordered by 2010 for induction into the Indian Navy in 2017.

Designed by the Directorate of Naval Design, the aircraft carrier can operate a combination of Russian MiG-29K, Ka31 and the indigenous light combat aircraft. It will be powered by two LM2500 gas turbines. The design incorporates highly automated systems for machinery operation, ship navigation and survivability.

The ship will have an overall length of 260m and a breadth of 60m and its displacement will be 40,000t. The ship can accommodate 1,600 personnel including ship company, airgroup and troops.

The design and construction of the first aircraft was approved by the Indian Government in January 2003. The construction work began in November 2006. Built through modular construction, a total of 874 blocks were fabricated for the erection.

The ship is constructed from high-strength steel manufactured in-house with the assistance of the Defence Research and Development Organisation and the Steel Authority of India. These aircraft carriers will be the biggest warships ever built by CSL.

Fincantieri of Italy will provide assistance for propulsion system integration and the Naval Design Bureau of Russia will supply its aviation technology.

The Ministry of Defence granted funds to the shipyard to improve infrastructure such as workshops and heavy-duty machinery. The ship will be completed in two phases.

The first phase includes the work up to first launch at the end 2010, while the second will cover the remaining works until the delivery of the ship.

The flight deck will feature two take-off runways and a landing strip equipped with three arrester wires. The STOBAR (short take-off but arrested recovery) system on an angled flight deck is used to launch and recover an aircraft from the deck of an aircraft carrier. IAC-2 will be fitted with steam catapults rather than STOBAR to launch fourth-generation aircraft. The aircraft carrier can accommodate up to 30 aircraft. It will have adequate hangar and maintenance facilities for aircraft onboard.

The airgroup will be a mix of combat aircraft including the MiG-29K, Sea Harrier and naval light aircraft as well as the HAL Dhruv and Ka-31 helicopters. The Ka-31 provides airborne early warning coverage.

The aircraft carrier will be fitted with a vertical launch system for long-range surface-to-air missiles. A close-in weapon system will provide self-defence for the ship against incoming anti-ship missiles and aircraft. Four OTO Melera 76mm Super Rapid guns – two on the bow section and two at the stern side – will be fitted. They can fire 120 rounds a minute at a range of 30,000m.

The Vikrant-class ships will be equipped with a modern early air warning radar, VHF or UHF tactical air navigation and direction finding systems. The ship will also feature jamming capabilities. The combat management system onboard will use sensors and tactical data links to provide real-time situational awareness.