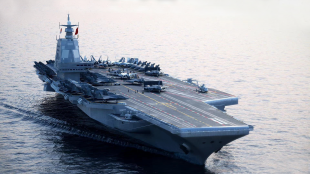 The Type 004 aircraft carrier is a planned aircraft carrier of the People's Liberation Army Navy's aircraft carrier programme. It is intended to be an iteration on the preceding Type 003 aircraft carrier, and like the Type 003, it will feature an integrated electric propulsion system that will allow the operation of electromagnetic launch catapults. Unlike the conventionally-powered Type 003, the Type 004 will be larger and also the first Chinese carrier to feature nuclear marine propulsion, and could generate enough electricity to power laser weapons and railguns currently under development. As of 2017, China hoped to complete this carrier by the late 2020s, and indicated that up to four might be built.