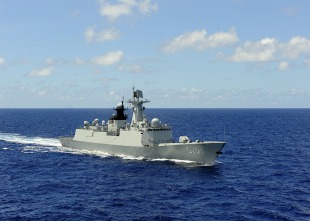 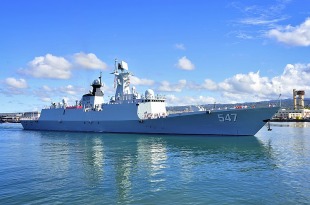 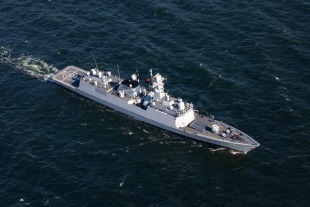 The Type 054A (NATO/OSD Jiangkai 2) is a class of guided-missile frigate from the People's Republic of China. It is a development of the Type 054 frigate; compared to its predecessor, the Type 054A has medium-range air defense capability in the form of Type 382 radar and vertically launched (VLS) HHQ-16 surface-to-air missiles.

The Type 054A entered service with the People's Liberation Army Navy (PLAN) in January 2008, and was a key component of the PLAN's surface fleet by the late 2010s. Production was ongoing in 2021.

The Type 054 was heavily influenced by the La Fayette-class frigate from France, and so reflected the strategic and operational requirements of that country. The development of the Type 054A may have been driven by China's need to address high-intensity armed conflict.

The Type 054A uses the same stealthy hull form as the Type 054. The forward launcher for HQ-7 short-range SAM is replaced with a 32-cell vertical launching system for medium-range HHQ-16 SAMs and Yu-8 antisubmarine rockets. The smaller main gun and Type 730 close-in weapon system (CIWS) are also installed.

The radar suite makes use of technology reverse engineered from Russian systems; the affected Chinese systems may include the H/LJQ-382 air search radar (from the Fregat MAE-3) and the H/LJQ-366 fire control radar (from the Mineral ME). The HHQ-16 target illuminators may also be derived from the Russian MR-90.

Ships starting with the 17th unit were constructed with enhanced anti-submarine warfare capability — adding variable depth and towed array sonar — and the Type 1130 CIWS instead of the Type 730. These ships have been unofficially referred to as Type 054A+, Type 054A2, or modified Jiangkai II.

In 2015, Gabe Collins estimated that each ship cost US$348 million.