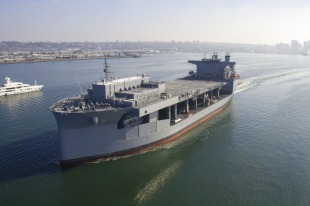 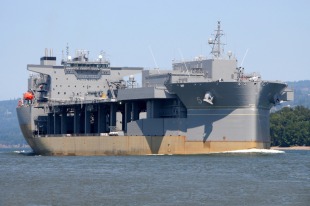 USNS Miguel Keith (T-ESB-5) is an expeditionary mobile base vessel currently in service with the United States Navy (USN).

The ship was named in honor of Lance Corporal Miguel Keith, United States Marine Corps, by United States Secretary of the Navy Richard V. Spencer at the 242rd United States Marine Corps Birthday Ball held in National Harbor, Maryland, on November 5, 2017. The ship's namesake received the Medal of Honor posthumously for combat action in Quang Ngai Province during the Vietnam War in 1970. Miguel Keith was the first naval vessel named by Secretary Spencer. Like her sister ships, the Miguel Keith is expected to be commissioned by the Navy sometime in 2020.

Miguel Keith had her keel laid on 30 January 2018 and delivered to U.S. Navy on 15 November 2019. The ship was damaged while under construction when the General Dynamics National Steel and Shipbuilding Company drydock was accidentally flooded on 11 July 2018.