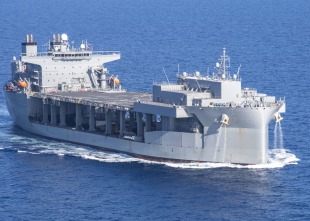 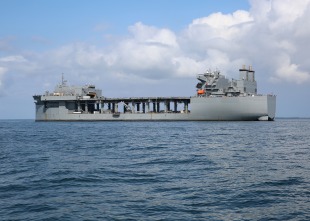 USS Hershel «Woody» Williams (ESB-4) (formerly USNS Hershel «Woody» Williams (T-ESB-4)) is a Lewis B. Puller-class expeditionary sea base, currently in service with the United States Navy. She is also a sub-variant of the Montford Point-class expeditionary transfer dock (Expeditionary Ship, Dock (ESD)). The ESDs are operated by the Navy's Military Sealift Command with predominantly civilian crews, while the ESBs, owing to the nature of their operations, have been commissioned and commanded directly by the U.S. Navy. The ship was named in honor of Hershel W. «Woody» Williams in an announcement by then-Secretary of the Navy Ray Mabus, on 14 January 2016. Williams is a Marine who earned the Medal of Honor in the Battle of Iwo Jima, during World War II.

The $498 million contract for the then-unnamed vessel was awarded to the National Steel and Shipbuilding Company (NASSCO), a division of General Dynamics, in December 2014. Her keel was laid on 2 August 2016, and she was scheduled to be completed in early 2018. The vessel was christened on 21 October 2017, at NASSCO in San Diego. She was delivered to Military Sealift Command on 22 February 2018, and placed into service the same day. She is set to be deployed to the Mediterranean Sea where she can potentially serve both United States African and European Commands

Hershel «Woody» Williams will be the first Navy ship other than the Littoral Combat Ship to deploy the Northrop Grumman MQ-8 Fire Scout rotary-wing UCAV.

She was commissioned by the Navy in Norfolk, Virginia on 7 March 2020. Williams was present for the ship commissioning ceremony.