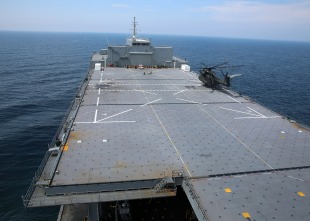 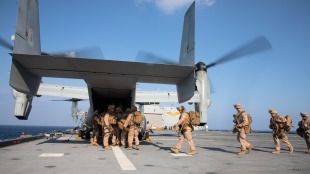 USS Lewis B. Puller (ESB-3), (formerly USNS Lewis B. Puller (T-ESB-3)), (formerly T-MLP-3/T-AFSB-1) is the first purposely-built expeditionary sea base vessel (previously classified as a mobile landing platform, and then as an afloat forward staging base) for the United States Navy, and the second ship to bear the name. She is the lead ship of her class of expeditionary mobile bases and is also a sub-variant of the Montford Point-class expeditionary transfer dock. Lewis B. Puller replaced USS Ponce (AFSB-(I)-15) with the U.S. Fifth Fleet in the Persian Gulf in Fall 2017.

Lewis B. Puller was commissioned on 17 August 2017 in Bahrain, with her prefix changing from USNS to USS and her hull designation changing from T-ESB-3 to ESB-3.

The Lewis B. Puller-class ships differ significantly from the U.S. Navy's first two expeditionary transfer dock support vessels, Montford Point (T-ESD-1) and John Glenn (T-ESD-2). These two ships act as a floating base or transfer station that can be prepositioned off the target area. Lewis B. Puller and Hershel «Woody» Williams will serve as Expeditionary Mobile Bases to support a variety of low-intensity missions. This allows more expensive, high-value amphibious warfare ships and surface combatant warships to be re-tasked for more demanding operational missions for the U.S. Navy. These ESB variants are slated to operate in the Middle East and the Pacific Ocean.

Lewis B. Puller was operated by the Military Sealift Command and designation prefix was «USNS.» The crew consist of Department of the Navy civilian mariners. Lewis B. Puller is intended to replace USS Ponce, the U.S. Navy's interim AFSB support ship.

Effective 4 September 2015, U.S. Secretary of the Navy Ray Mabus officially announced the creation of a new ship designation, «E» for expeditionary support. Mobile Landing Platforms (MLPs) will be called Expeditionary Transfer Dock, or ESD; and the Afloat Forward Staging Base (AFSB) variant of the MLP will be called Expeditionary Mobile Base, or ESB. The new designation was pursuant to a memorandum sent to Secretary Mabus from Chief of Naval Operations Admiral Jonathan Greenert dated 31 August 2015.