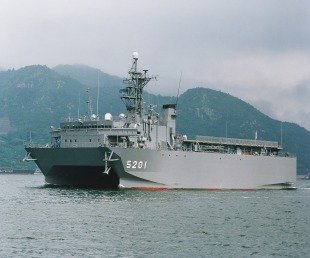 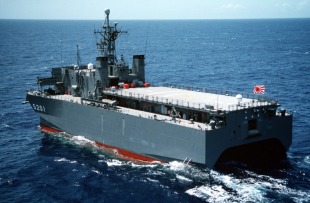 Namesake:
Hibiki - In audio signal processing and acoustics, an echo is a reflection of sound that arrives at the listener with a delay after the direct sound
Operator:

Hibiki was laid down on 28 November 1989 at Mitsui Engineering & Shipbuilding, Tamano and launched on 27 July 1990. She's commissioned on 30 January 1991. Currently, her homeport is in Kure.

After deployment, from 9 March 1991, the same year, it was circulated to Oakland, California, USA for proficiency training after service, and after learning the SURTASS system, it was equipped with a sonar array in Pearl Harbor, Hawaii, and after the equipment certification test was completed, she returned to Japan on 17 October, the same year.

Full-scale operation started in April 1992, and the actual operation was where the anti-submarine information analysis center on land began.

On 1 November 2017, the crew system was introduced to the 1st Acoustic Measurement Corps for the first time as a JMSDF ship, and from now on, the crew will not be fixed, and 3 crews will operate two ships alternately.