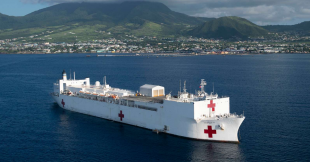 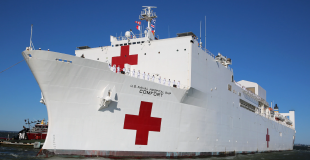 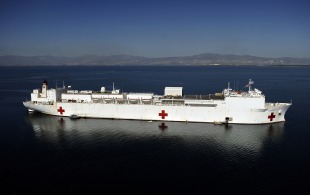 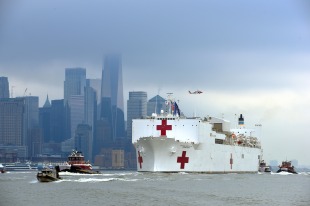 USNS Comfort (T-AH-20) is a Mercy-class hospital ship of the United States Navy.

From 30 March to 30 April 2020, Comfort was stationed in New York City to help combat the city's coronavirus pandemic by treating non-coronavirus, and later on, coronavirus-positive patients.

In accordance with the Geneva Conventions, Comfort and her crew carry no offensive weapons. Firing upon Comfort would be considered a war crime as the ship only carries weapons for self-defense. In keeping with her status as a non-combatant vessel, naval personnel from the combat specialties are not assigned as regular crew or staff. Underway embarks by Navy Unrestricted Line officers (e.g., warfare qualified combat specialties), enlisted Naval Aviation, Surface Warfare, Submarine Warfare, Special Operations or Special Warfare/SEAL personnel, or any Marine Corps officers or enlisted personnel, are typically limited to official visits, helicopter or tilt-rotor flight operations or as patients.

Like her sister ship USNS Mercy, Comfort was built as a San Clemente-class oil tanker in 1976 by the National Steel and Shipbuilding Company. Her original name was SS Rose City and she was launched from San Diego, California. She is the third United States Navy ship to bear the name Comfort, and the second Mercy-class hospital ship.

Her career as an oil tanker ended when she was delivered to the U.S. Navy on 1 December 1987. Her last Captain was Lance Orton of Clarence, New York, a graduate of the Fort Schyler Merchant Marine Academy.

After a quarter-century in Baltimore, Maryland, Comfort changed her homeport to Naval Station Norfolk in Norfolk, Virginia in March 2013. The move placed the ship closer to supplies, much of which come from Naval Medical Center Portsmouth, and to medical crew. Savings to the U.S. Navy are estimated at $2 million per year.