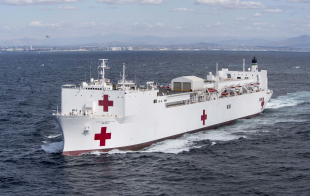 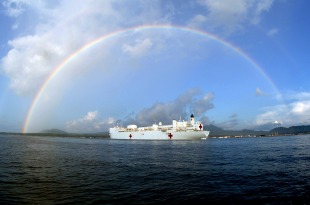 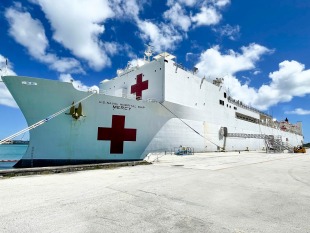 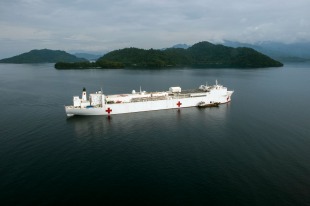 Namesake:
Mercy is benevolence, forgiveness, and kindness in a variety of ethical, religious, social, and legal contexts
Renaming:
Operator:

USNS Mercy (T-AH-19) is the lead ship of her class of hospital ships in non-commissioned service with the United States Navy. Her sister ship is USNS Comfort (T-AH-20). She is the third US Navy ship to be named for the virtue mercy. In accordance with the Geneva Conventions, Mercy and her crew do not carry any offensive weapons, though defensive weapons are available.

United States Naval Ship (USNS) Mercy was built as a San Clemente-class oil tanker, SS Worth, by National Steel and Shipbuilding Company, San Diego, California, in 1976. Starting in July 1984, she was renamed and converted to a hospital ship by the same company. Launched on 20 July 1985, Mercy was placed in service on 8 November 1986. She has a raised forecastle, a transom stern, a bulbous bow, an extended deckhouse with a forward bridge, and a helicopter-landing deck with a flight-control facility.

The conversions from oil tankers cost $208 million per ship and took 35 months to complete. The Mercy-class hospital ships are the third largest ships in the US Navy Fleet by length, surpassed only by the nuclear-powered Nimitz- and Gerald R. Ford-class supercarriers.

Mercy, homeported in San Diego, is normally in reduced operating status. Her crew remains a part of the staff of Naval Medical Center San Diego until ordered to sea, at which time they have five days to fully activate the ship to a NATO Role III Medical Treatment Facility. The only higher level being onshore fixed facilities outside the theater of operations. Like most USNS ships, mariners from the US Navy's Military Sealift Command are responsible for navigation, propulsion, and most deck duties on board. Mercy is as of 2012 part of MSC's Service Support Program. The «Medical Treatment Facility», or hospital on the ship, is commanded by a captain of the Navy Medical Corps or Navy Nurse Corps.