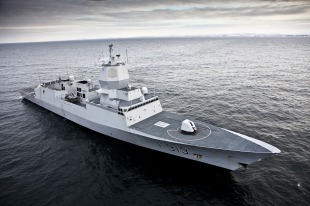 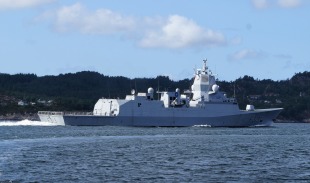 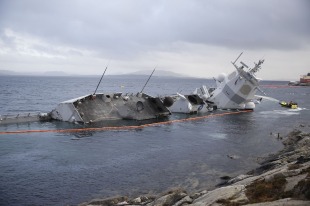 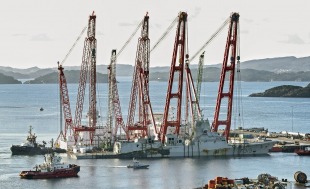 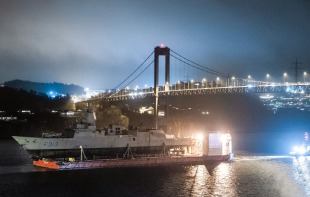 She was raised in a salvage operation from 27 February 2019 to 3 March 2019. In June 2019 after it was deemed uneconomical to repair her, it was decided that she would be scrapped.

The ship was ordered for construction on 23 June 2000 by Norway and built by the Spanish shipbuilders Navantia at Ferrol, Spain. The vessel was the fourth of the Fridtjof Nansen class to be constructed, and was laid down on 28 April 2006. Construction had been delayed by disputes over quality control. The frigate was launched on 23 November 2007 and named for the Norwegian explorer Helge Ingstad. Helge Ingstad was commissioned in the Royal Norwegian Navy on 29 September 2009.

From December 2013 to May 2014, Helge Ingstad was one of the escort ships for merchant vessels carrying chemical weapons from Syria to be destroyed.

On 8 November 2018, while returning from a NATO exercise, she was navigating inshore waters north of Bergen at speeds of up to 17.4 knots (32.2 km/h; 20.0 mph). Starting from around 03:40 there was a watch handover on board Helge Ingstad, during which three oncoming vessels were noted. After radio communication was established, and upon being asked to alter course to starboard, to avoid the 250-metre (820 ft), 112,939 t, Maltese-flagged oil tanker Sola TS, escorted by VSP Tenax, which had just left its berth, Helge Ingstad believed the vessel calling them to be one of the oncoming vessels they were tracking on radar. Assuming the tanker, slow moving and with its bright deck lights obscuring its navigation lights, to be part of the shore installation, the frigate intended passing it before altering course moving near her starboard channel margin. By the time they realised their error they were within 400 metres (440 yd) of Sola TS and it was too late to avoid a collision. Preben Ottesen, the ship's commanding officer, stated that he was asleep in his cabin when the collision happened, and was in fact woken by the collision.

The collision caused severe damage to Helge Ingstad, which lost control of engine and steering, with a large breach along her side from the starboard torpedo launchers to the stern. The vessel grounded and continued to take on water, through the propeller shaft and stuffing boxes. Seven sailors were injured in the incident. By late morning she had developed a severe list to starboard with most of the stern submerged. Despite damage control efforts the vessel sank in the early hours of 13 November, with only small sections of the superstructure remaining above water. The failure of the vessel's watertight integrity led to an immediate safety alert to designers Navantia, calling on them to advise operators of similar vessels on any necessary measures to address safety. This is the first incident of such scale in the Royal Norwegian Navy since 1994, when HNoMS Oslo was lost after it ran aground.

Unlike Helge Ingstad, Sola TS only suffered minor damages in its front and was never in danger of sinking. She was able to continue to her destination after the incident. The tanker subsequently sailed to a shipyard in Gdańsk for repairs and was back in regular service by late December 2018.

Following the frigate's sinking, a local fish farming company, which had had to move fish from the area due to spill of diesel oil from the vessel, claimed one million kroner (US$ 116,000) in damages from the Ministry of Defence.

The Norwegian Navy inspected Helge Ingstad by the Norwegian Blueye Pioneer underwater drone. Poor weather hampered salvage operations through December 2018; with the planned date to raise the ship being delayed until late January 2019.

The lifting operation began on 26 February 2019. On 27 February 2019, due to weather concerns, the partially raised ship was moved to a location which is better protected from the elements, where further salvage work took place. The ship and the two heavy lift vessels (Rambiz and Gulliver) reached the Semco Maritime yard at Hanøytangen on 28 February 2019. Boarding parties consisting of some 300 people, including around 100 members of Helge Ingstad's original crew, assisted in pumping out the remaining water so that the ship could be placed on a barge and fully salvaged. Helge Ingstad was successfully placed on a barge on 2 March 2019 Boa barge 33 carrying Helge Ingstad arrived at the Haakonsvern naval base on 3 March 2019.

In May 2019 the cost of repairing the frigate was estimated at 12 billion NOK (approximately EUR 1.2 billion), implying that it would be cheaper to build a new ship. However, restarting production for just one ship could result in a disproportionally high per-ship cost.

The Accident Investigation Board Norway (AIBN) and the Defence Accident Investigation Board Norway (DAIBN) immediately began a joint investigation, with the involvement of the Marine Safety Investigation Unit of Malta. On 29 November 2018 the AIBN published their preliminary accident report together with two interim safety recommendations. It recommended that the Norwegian military authorities investigate the findings of the preliminary report with a view to implementing any necessary safety measures, and that the shipbuilder Navantia investigate relevant aspects of the design of the frigate and whether other ships might be similarly affected. The watertight condition of the ship was supposedly guaranteed by the 13 watertight bulkheads. Seven compartments were damaged as a result of the collision but initially the ship remained afloat. No one intervened to break the chain of errors. If the commander had observed COLREGS the collision would not have occurred.

On 14 May 2019 it was reported the cost of repairing Helge Ingstad would exceed US$1.4 billion, according to the Forsvaret, nearly three times the original cost to build her.