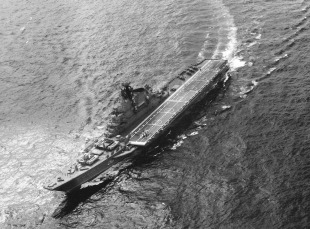 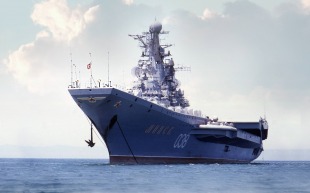 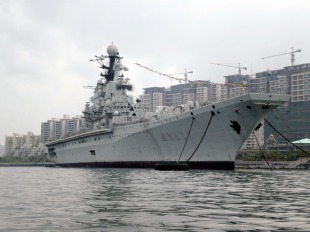 Minsk is an aircraft carrier (heavy aircraft cruiser in Russian classification) that served the Soviet Navy and the Russian Navy from 1978 to 1994. She was the second Kiev-class vessel to be built.

From 2000 to 2016 it has been a theme park known as Minsk World in Shatoujiao, Yantian, Shenzhen, China.

In April 2016, Minsk was towed to Jiangsu for exhibition.

Minsk operated with the Pacific Fleet. Shortly after the Sino-Vietnamese War of 1979, Minsk was deployed to the South China Sea, making a port of call at Cam Ranh Bay, Vietnam, in September 1980. She visited Vietnam again in 1982 during her second deployment before sailing onto the Indian Ocean. In 1984, Minsk, the Ivan Rogov-class landing ship Aleksandr Nikolayev, and Vietnam forces conducted the Soviet Navy's first amphibious landing in Vietnam.

Soviet cosmonaut Oleg Grigoriyevich Kononenko survived an aircraft ejection on the Minsk in 1979. On September 8, 1980, he was killed in the crash of a Yakovlev Yak-38 VTOL fighter on the Minsk.

The carrier was retired as a result of a major accident (details not known) which required the facilities at the Chernomorskiy yard, in Mykolayiv, located in the newly independent Ukraine (the reasons for not attempting a repair are not known).

In 1995 Minsk was sold for scrap to a South Korean company. Due to protests from South Korean environmentalists, the ship was resold to the Chinese state-owned Guangdong Ship Dismantling Company. The ship was again saved from the scrapyard when a group of Chinese video-game arcade owners formed the Shenzhen Minsk Investment Company to buy the ship for $4.3 million.

Minsk became the centerpiece of a military theme park in Yantian district, Shatoujiao sub-district, Shenzhen called Minsk World. However, the Shenzhen Minsk company went bankrupt in 2006, and the carrier was put up for auction on 22 March 2006. On 31 May 2006, the carrier was sold in Shenzhen for 128 million RMB to CITIC Shenzhen.

The ship was again sold to Dalian Yongjia Group, a real estate company in Dalian in North China, on 1 January 2013. On 3 April 2016, Chinese news reported the aircraft carrier had been towed to a new destination, Zhoushan for refit, because of the decline of the number of tourists after 2006. After the refit is completed, the ship would be taken to Nantong on the Yangtse River in Jiangsu Province and moored to the west of Sutong Yangtze River Bridge as part of a new theme park that will be opened in 2017. But until 2018, the project has been in the process of being delayed.