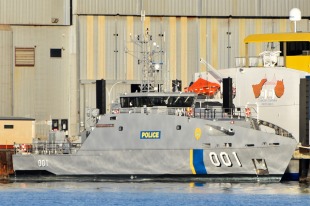 Australia is building PSS Remeliik II, for Palau, to replace the Pacific Forum patrol boat PSS Remeliik. In the late 1980s and early 1990s Australia helped its smaller neighbours, in the Pacific Forum by building small patrol boats so they could protect their own sovereignty. The United Nations Convention on the Law of the Sea (UNCLOS), had extended an exclusive economic zone (EEZ) 200 kilometres (120 mi) off the shores of all maritime nations, and for small Island nations in the Pacific protecting their EEZ would be an overwhelming problem.

The original patrol boats were designed for a lifetime of approximately thirty years, and, prior to reaching this date, Australia designed and started building replacement vessels. The Guardian-class patrol vessels are larger, and more capable than the original vessels. But, like the original Pacific Forum boats, they were designed to use commercial off-the-shelf components, so they would be easier to maintain in small isolated shipyards.

Remeliik II was scheduled for delivery in June 2020. Australian Industry Minister Melissa Price handed the vessel over to Paluan officials on September 18, 2020.