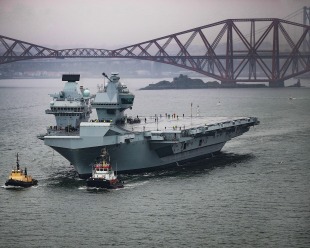 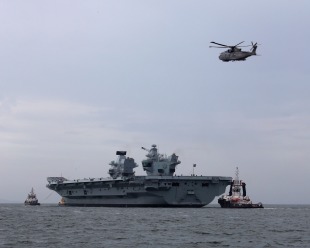 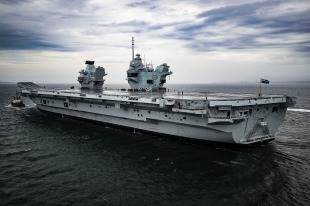 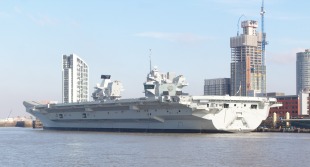 HMS Prince of Wales (R09) is the second Queen Elizabeth-class aircraft carrier. Unlike most large aircraft carriers, Prince of Wales is not fitted with catapults and arrestor wires, and is instead designed to operate V/STOL aircraft; the ship is currently planned to carry up to 40 F-35B Lightning II stealth multirole fighters and Merlin helicopters for airborne early warning and anti-submarine warfare, although in surge conditions the class is capable of supporting 70+ F-35B. The design emphasises flexibility, with accommodation for 250 Royal Marines and the ability to support them with attack helicopters and troop transports up to and larger than Chinook size.

The completed Prince of Wales began sea trials in September 2019 and first arrived at her new home base of HMNB Portsmouth in November 2019. The ship was formally commissioned into the Royal Navy at a ceremony in Portsmouth on 10 December 2019. The ship's commissioning date marked the 78th anniversary of the sinking of her predecessor which was lost in action along with HMS Repulse in 1941. She is the eighth Royal Navy ship to have the name HMS Prince of Wales. Construction of the ship began in 2011 at Rosyth Dockyard and ended with launch on 21 December 2017. She was handed over to the Royal Navy in 2019, and will be fully ready for front-line duties around the globe from 2023.

The two ships of the Queen Elizabeth class will each carry four PTBs made by Blyth-based company Alnmaritec. Each 13.1 m (43 ft) long PTB carries 36 passengers and two crew to operate the vessel and is davit-launched. To enable the craft to fit into the docking area the navigation and radar masts are fitted with Linak actuators so that they can be lowered automatically from the command console. The enclosed cabin is heated and there is a set of heads forward.

Defensive weapons include the Phalanx Close-In Weapons System for anti-aircraft and anti-missile defence, and 30mm Automated Small Calibre Guns and Miniguns for use against fast attack craft.