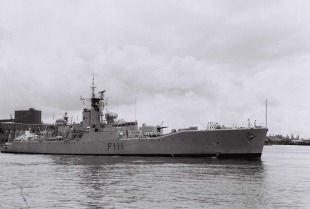 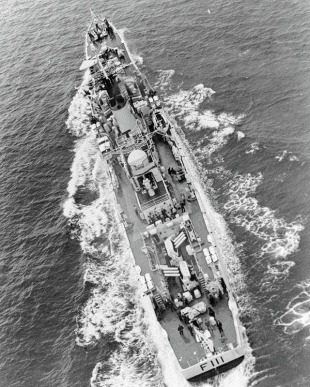 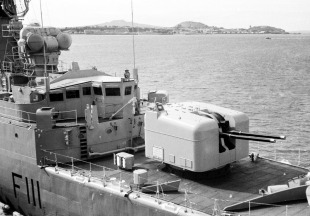 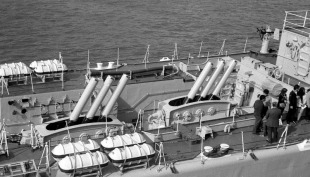 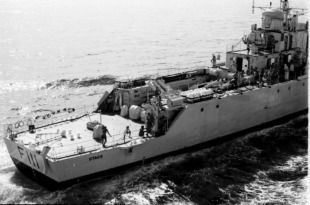 Namesake:
Otago is a region of New Zealand in the south of the South Island administered by the Otago Regional Council.
Operator:

HMNZS Otago (F111) was a Rothesay-class Type 12M frigate, or separately designated, Otago-class frigate acquired from the Royal Navy by the Royal New Zealand Navy (RNZN) before completion. Otago and Taranaki significantly differ from the Royal Navy Rothesays as the RNZN is a conventionally armed navy, and the New Zealand ships have a slightly higher level of conventional capability, with the long range Type 177 sonar to combine with the only operational MK 20 heavyweight torpedo,(where the RN versions in most cases had an accurate short range Type 174, initially) and provide more comfort for the crew in cafeteria and bunk bedding. She was launched on 11 December 1958 by Princess Margaret, and was commissioned into the Royal New Zealand Navy on 22 June 1960. As ordered the frigate was intended to mount a twin Mk 5 40mm for close in AA to supplement the 4.5 turret but by 1960 the RNZN had made the decision to rely on missiles in the form of Seacat for AA as soon as the system could be refited and the Otago and sister Taranaki were fitted only with a single 40mm on completion with Seacat being refitted in NZ in 1963-64. During the confrontation with Indonesia in 1964-6, HMNZS Otago, in line with most RN frigates was refitted with a couple of WW2 20mm single mounts for junk bashing, its sister Taranaki (and probably Otago also) had Mk 3 40 mm Bofors temporarily fitted for this, in the unusual arrangement of the port mounting placed further forward where the triple torpedo tubes would later be mounted, and the starboard mounting further aft where the 20mm mounts would later be positioned. Later in the decade US Mk 32 tubes were fitted for Mk 44/46 torpedoes in place of the tubes for ineffective, RN Mk20 torpedoes, in line with the ANZUS alliance, the UKs 1968 decision to withdraw from East of Suez and the belief of the RNZN anti sub specialists and director of plans that Limbo mortars were useless for anything but killing huge numbers of fish in the Hauraki Gulf.

The ship was named after the province of Otago in New Zealand's South Island, and associated with the city of Dunedin.